Tuesday night is Latin Night. For the last few years my friend AH and I have struggled with participles, infinitives (split and otherwise), subjunctives, declensions and conjugations and that’s before we tackle Latin! Did I ever mentioned that I went to secondary school when grammar was considered a thing of the past? Perhaps it obvious was …. Comprehensive schools in the 1960s and 1970s placed emphasis on creativity and that was great until…I started learning a new language.

AH and I started learning Latin with Minimus –  ‘the mouse that made Latin cool’ – a Latin course for younger children (ermmm, AH and I are a little bit older) based on a family that lived at Vindolanda – just up the road on Hadrian’s Wall – in 100AD. After Minimus we began the Cambridge Latin Course and are currently on Book IV.

I know for a fact that we’ve been studying Latin for four years because on the day we first started translating Minimus AH’s neighbour popped in to tell AH that she was expecting a baby. That expectation is now a beautiful little girl of four. We may be slow but we have kept going, 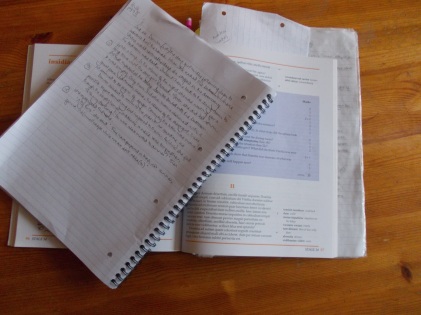 and have recently been joined by another friend who is on Book II and consequently gives us an opportunity to revise what we have learnt. We have a theory that as we turn the last page of the last book (only one more to go….eeeeeek) we will be magically transformed in to natural Latin speakers. Fingers crossed.

I can’t imagine why we have taken so long…