Interrailing has begun. I started my train travels today on the International train ICE123 from Amsterdam to Trier via Cologne (Koln).

I stumbled a bit at the first hurdle as couldn’t find my reserved seat! However I was sitting on the right train, in the right carriage in what I thought was an unreserved seat so I was congratulating myself on being correct on two out of three until there was a tap on my shoulder and a gentleman pointed out that I was in his seat! Colour me beetroot red.

Apparently ‘freigeben’ doesn’t mean the seat is free rather it means that you should give up your seat if asked…. oh the shame….. To be fair the numbering of the seats was very odd. I had reserved seat number 12 but when I walked up the carriage I realised that there were not enough seats to go down to number 12 however once evicted from my seat (did I mention the shame?!) closer inspection revealed that the numbers jumped from the 20’s to 12 with nothing in between and nothing after. I obviously get my number dyslexia from my father’s side!

Still it was rather funny and pushed me stumbling through my basic German to the amusement of the other passengers (‘What did that woman say? “The cats eat the beetles?!”‘). Baptism of fire? Yes. But it was the best way to get going with a new language. Now anyone that cares to listen is getting blasts of Moke-German. Poor souls. My sympathy goes out particularly to the taxi driver who had my full range of conversation about the weather and the lack of rain.

Back in my comfort zone I have finished the Newcastle wool and while on the train to Trier I got started with the Amsterdam yellow. Doubled up to match the weight of the Newcastle yarn it is vibrant and crocheting beautiful. It’s like sunshine on a blue-sky day. 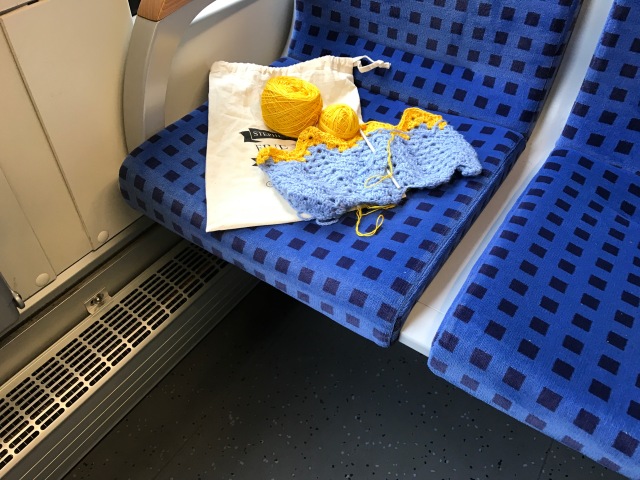 The journey from Koln to Trier was beautiful. It does I suppose fall in the Rhineland renowned for its wonderfulness. As it got further from Koln the little regional train – no reservation nightmares here (can’t get past the shame) as no reservations! – wound its way along rivers and through pretty towns and villages. Woodlands clothed the hills that rose on either side. The colours of Autumn embellished and amber-blazed the trees. Oh it was soooo restful. Infact soooo restful I struggled to keep my peepers open as I gazed at the passing countryside.

Soporific isn’t it? Appears I was not alone. 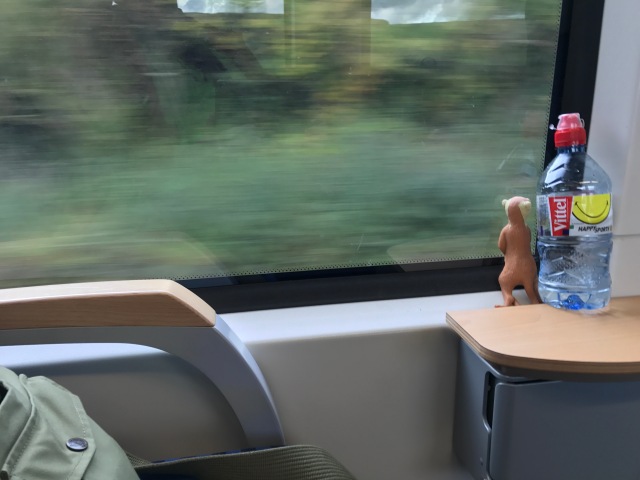 Now I am in Trier and excited about visiting the many Roman and Medieval sites/sights tomorrow. Will also need to look out for a good wool shop. Any ideas about shops in Trier or what colour to get next?

Before I sign off. I love this idea … wonder what I will get in my goody bag? 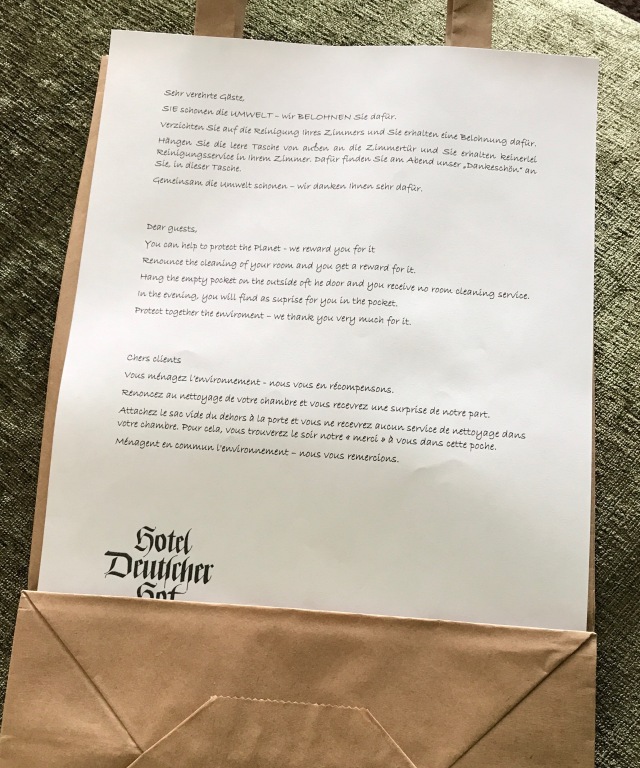