What do we have here?

Walking boots (pristine), walking stick and small version backpack? Could this mean someone is getting up from their ever spreading posterior and going outdoors, the proper outdoors with fields, hills and stuff? As you can see I thought I had better capture this moment in case the like is never seen again. But after yesterday’s wonderful excursion I am sure it will be the first such outing of many. You at the back I can hear you guffawing!

No rain, no wind and something I think might have been warmth. Perfect walking weather here in Cumbria! Wonders will never cease. My friends J and JF have kindly adopted me into their small but perfectly formed walking sorority. Discreetly ignoring the risk that they would see snails outstrip us they had come up with a walk (about 4.5 miles…yes miles!) around the village of Hawkshead. Sadly JF could not make this one but J armed with her “Dry Stone Walling Association Cumbria Branch Hawkshead Walling Walk” (nothing like a snappy title) pamphlet led her walking novice on a fantastic trail capturing not only the diversity of dry stone walling (with walls that could spin more yarns than you could shake a slab of slate at) but also the social history of the area illustrated by the buildings along the way. In case you were wondering yes there is a church but you will have to wait for that particular delight.

Let’s kick off with how to get there. As you know I usually like bussing it, yesterday I was spoilt with a lift. BUT if you want to go by bus and I will certainly be testing this out the 505 Stagecoach Bus is the one for you. It leaves from Stand C at Kendal Bus Station HOWEVER it is a blink and you missed it sort of service from Kendal so you may have to travel via Windermere using the super-bus 555 to get yourself to and from Windermere Station and join the 505 there were the service is much more frequent (roughly every two hours). By car from Kendal simply follow signs for Windermere then on to Ambleside but before entering Ambleside proper turn left following signs for Langdale then look for left turn signposted Hawkshead…keep going you can’t miss it. Too vague for drivers? Bus times can be found on the Cumbria County Council’s website.

Time to get cracking. Having arrived at Hawkshead village J took a little detour to the National Trust shop and for a £5 refundable deposit picked up a key…all will be revealed in a little while. Read on.

Off we set down Red Lion Yard. Heralded in the aforementioned pamphlet as having ‘a wealth of craftmanship’ this little cobbled yard did not disappoint. From the local slates used for the outside steps to the old granary: 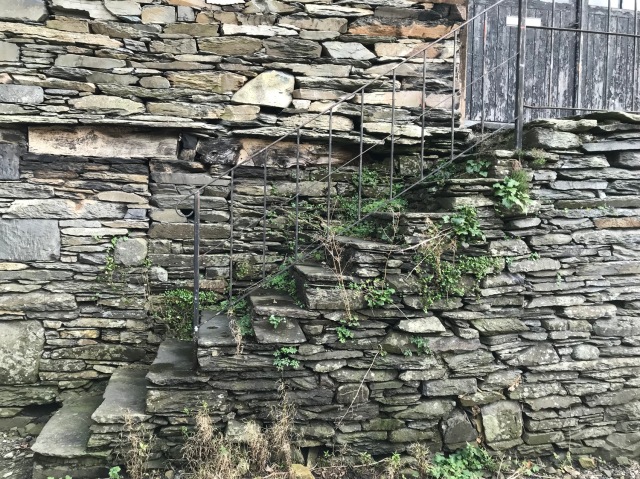 To the single slate lintel shielding the porch: 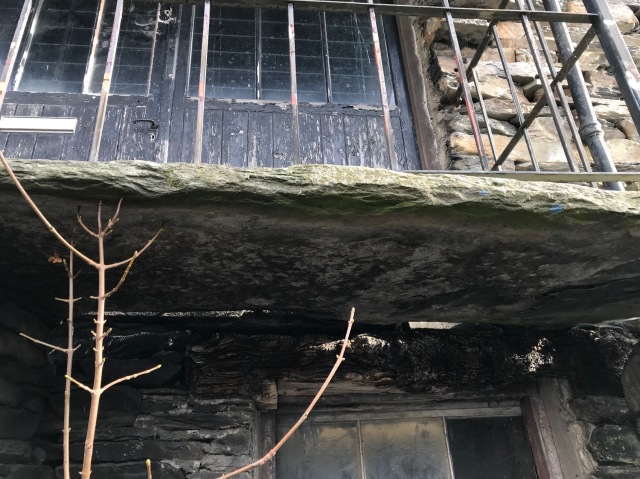 And the beams holding the roofing above the first floor entrance: 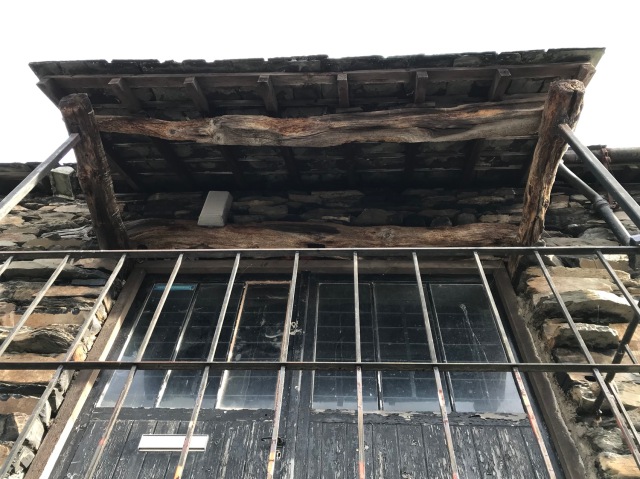 As we discovered throughout this walk the local people were and are artisans skilled at using a readily obtained resource, stone.

Along the winding paths are contrasting stone walling styles – sawn slate to the right of the path and natural stone to the left: 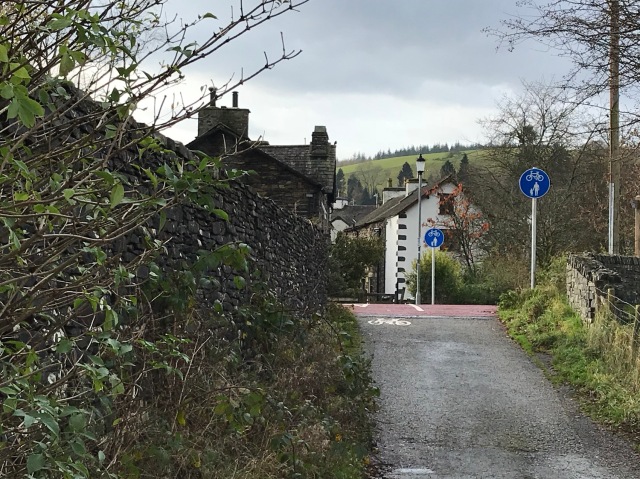 Flag fences grown into an ash tree where once perhaps in the 14th and 15th centuries monks from Furness Abbey may have used the walls to form a boundary between arable land and an important pathway: 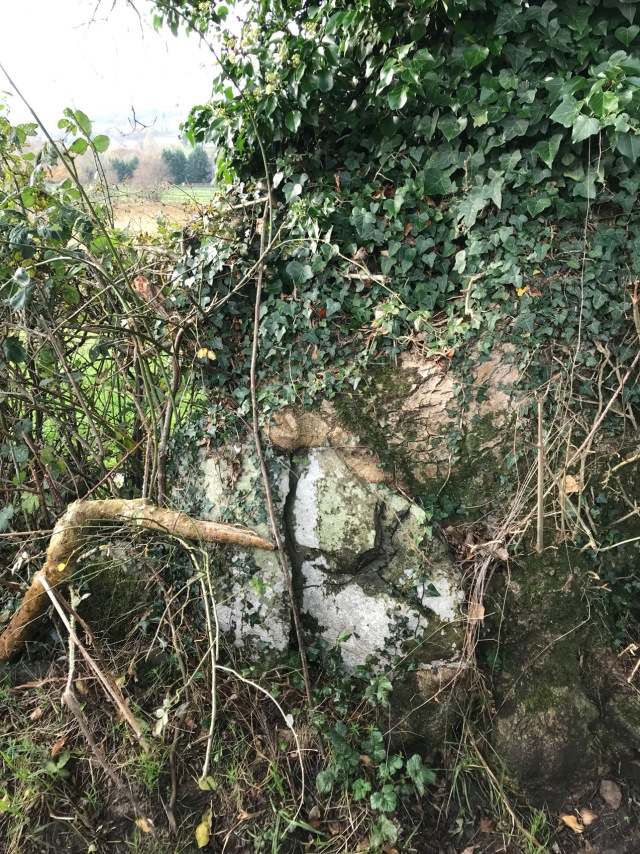 Hedges laid atop the flag fences: 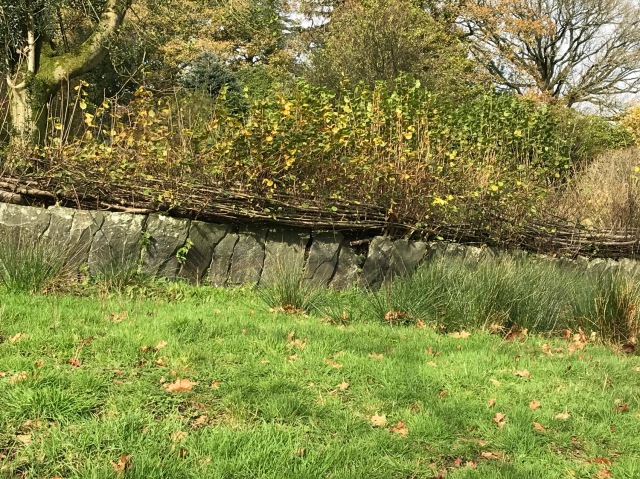 And clever interlinking of the large slabs where perhaps recent expert hands have repaired the fencing: 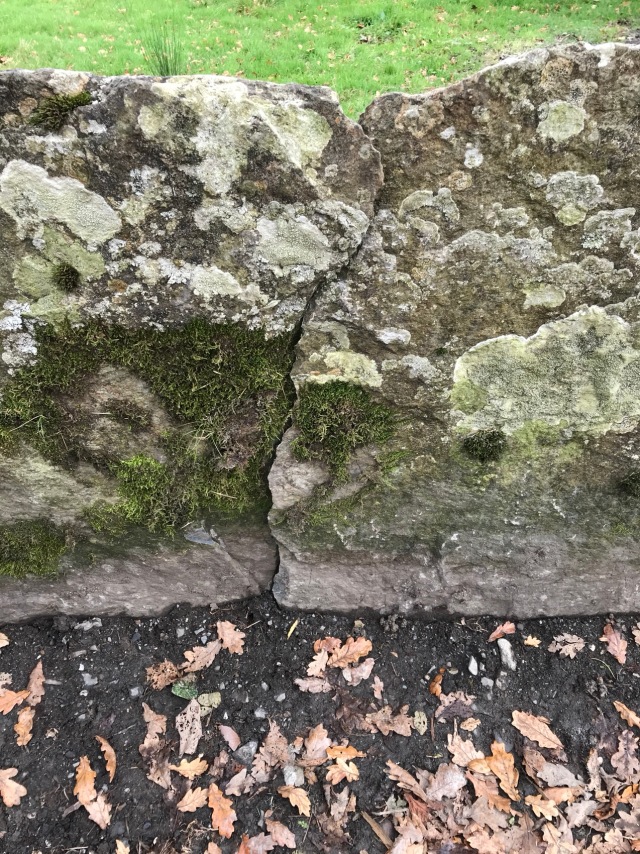 One site I was keen to see was at Colthouse, a hamlet just north of Hawkshead. The simple Quaker Meeting House built sometime around 1688-9 enjoyed by Wordsworth and visited by Beatrix Potter remains an active Quaker meeting place and is a reminder of the importance of this region in the birth and spread of The Friends’ quiet pacifist beliefs. 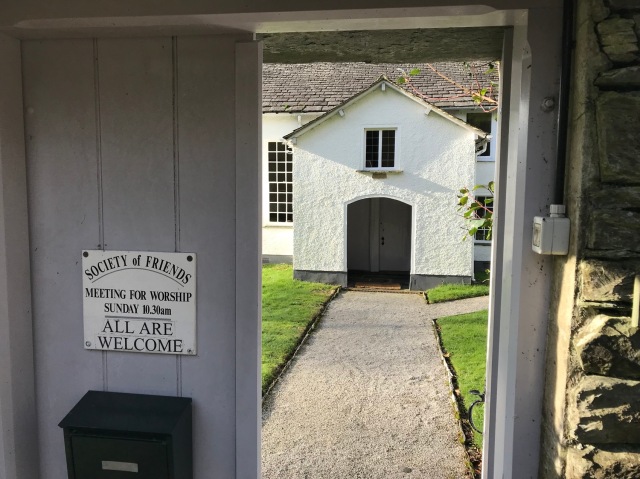 What about the key? A little way yet to go…keep reading.

Now this is a wow of a gate, to me anyhoo: 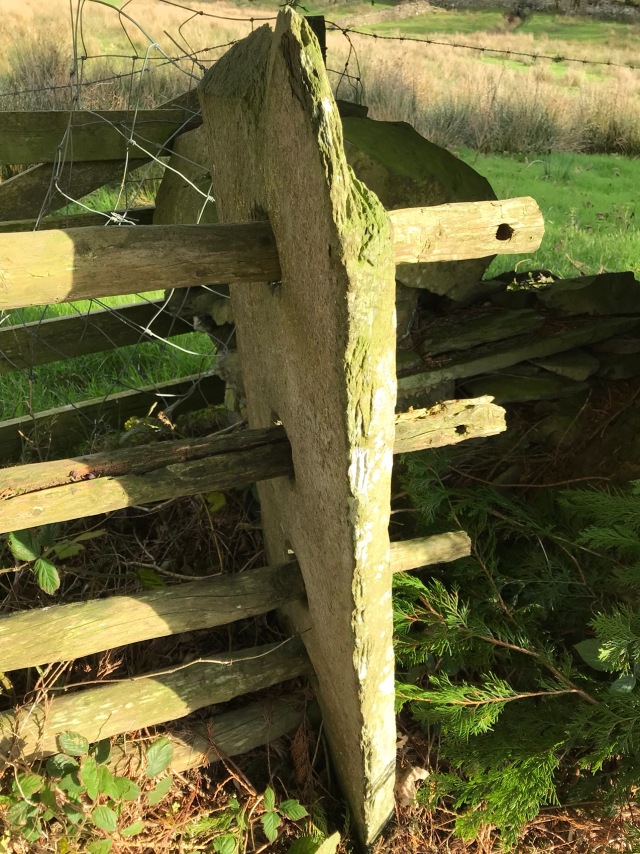 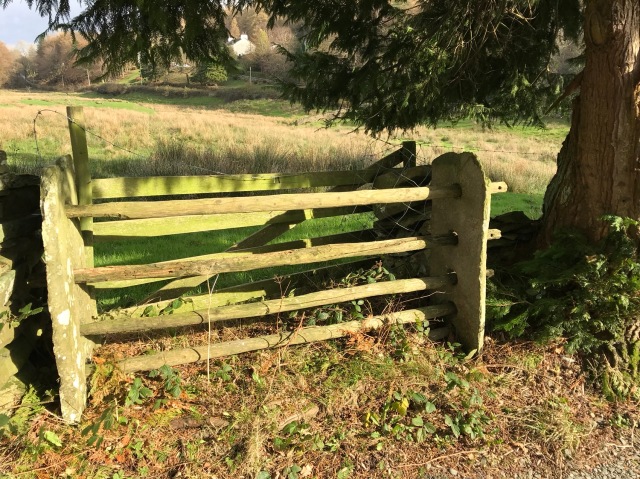 Created at a width perfect for horses and carts rather than tractors the stone gate stoups (that was a new word for me) have holes where the gate poles can be moved to open the gate. Notice the holes in the ends of the wooden poles? These are for pegs to prevent accidental slide-idge. Clever, eh?

Goodness actual sunshine is creeping into this photograph….. Cumbrians and those that have visited this beautiful county will know that it is a sight to be treasured. Time to bask and enjoy a cuppa. J and I reached Outgate Inn and parked ourselves in a pin fold – looking not unlike the stray sheep that were kept there until their owners collected them , baaaaah. After a deal of putting the world to rights we re-engaged with our surroundings (the best way to put the world to rights I think we agreed) and I tootled to capture further use of stone in the local landscape in one of my favourite buildings, a bus shelter!

A bus shelter with its own water pump. Mmmm. Moving on.

J’s pamphlet guided us to a ‘permissive path’ (snigger) running just above the road. This took us past small quarries, all this stone had to come from somewhere, a vertical wall joint perhaps marking an ownership boundary or two different wall building contracts and a wonderful single span slate bridge with a flag bounded kissing gate. 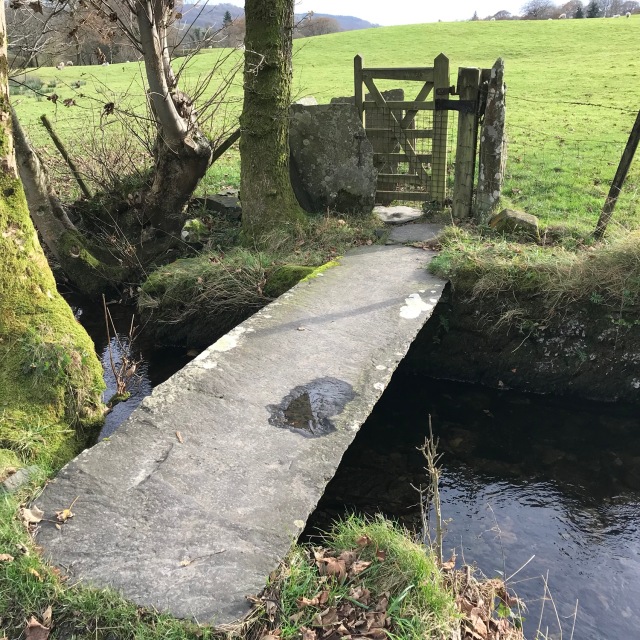 As to that key? Your patience is rewarded we arrived at our lunch pack stop, the Courthouse. 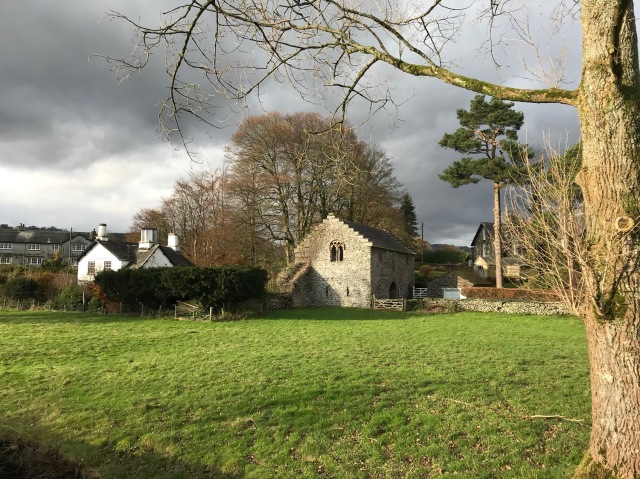 This snug little crow-stepped gabled building is the gatehouse and all that remains of Hawkshead Hall. The Gatehouse once used as a court dates from the 15th century. And up these steps and with the use of the much mentioned key… 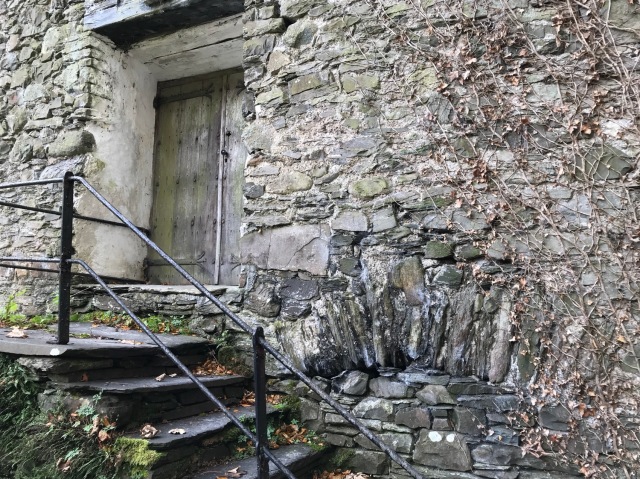 We got a look inside.

We parked ourselves and our sandwich boxes by the old fireplace. It’s dog-tooth design has led historians to believe it is older than the building perhaps even 13th century. 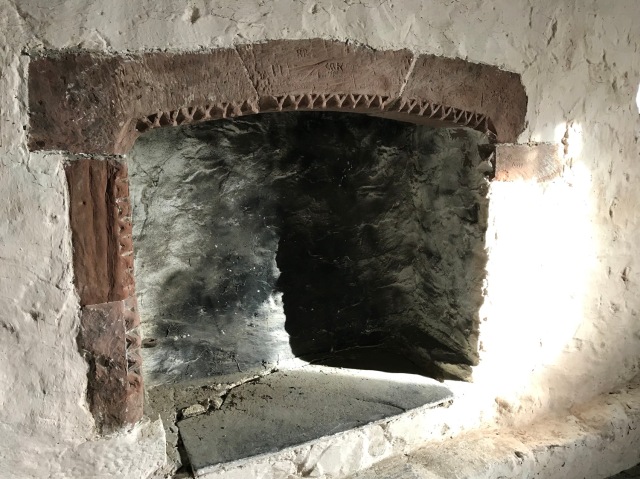 It appears graffiti is nothing new. Tut. 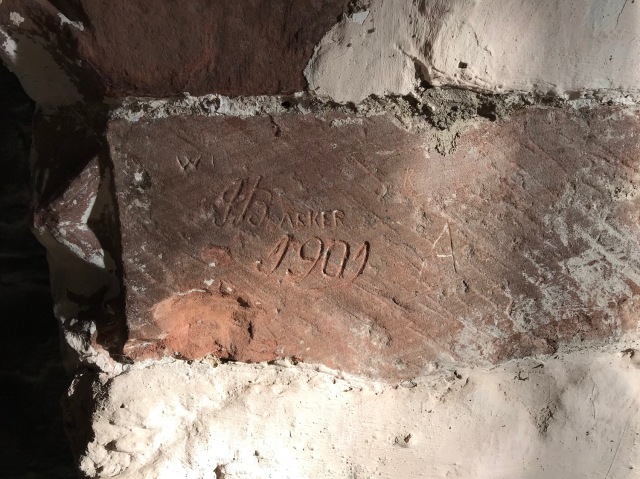 Altered and restored in the 1800s it is hard to escape the botch made to the main window. 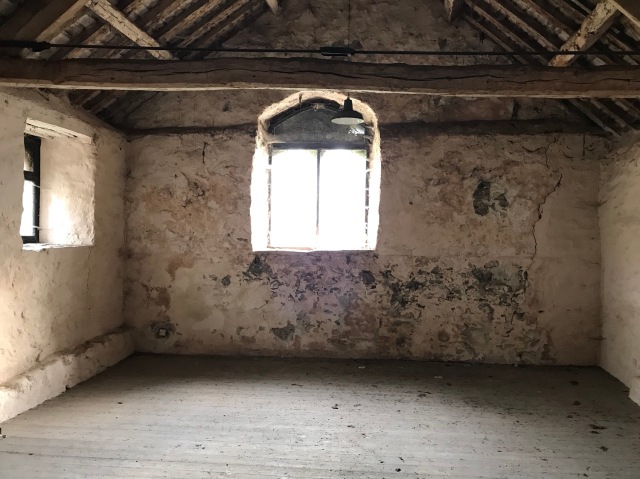 But what an atmospheric and historic place to eat your sarnies in. Cheese and tomato if you are interested.

Outside the old gateway gives a hint of the entrance to the original hall courtyard: 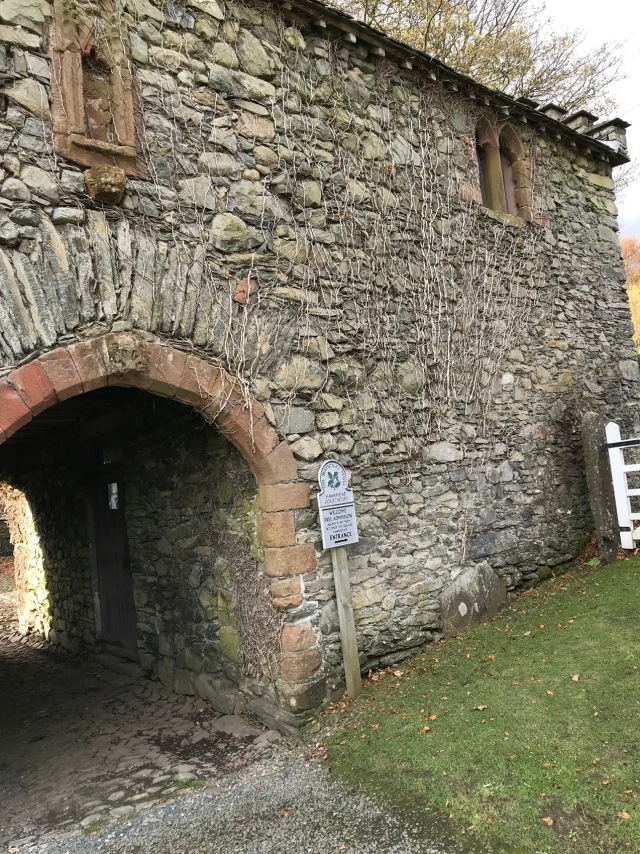 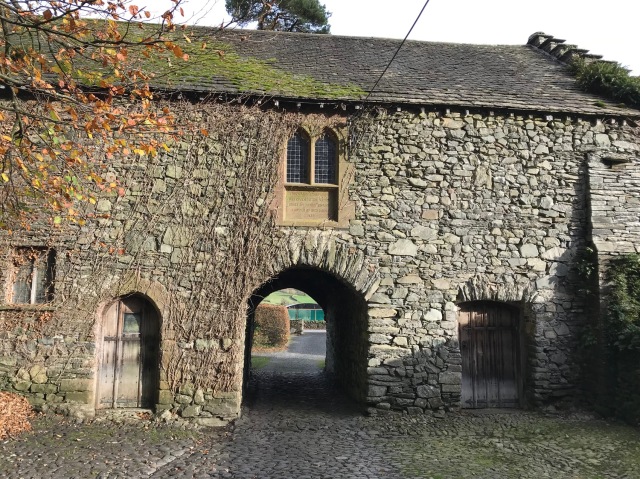 What a delight. And look. No people!

Well done J. Bit hard to top that but we did try. Continuing across the fields we arrived at almost our final destination the graveyard (gulp) of Hawkshead Parish Church, St Michael’s. 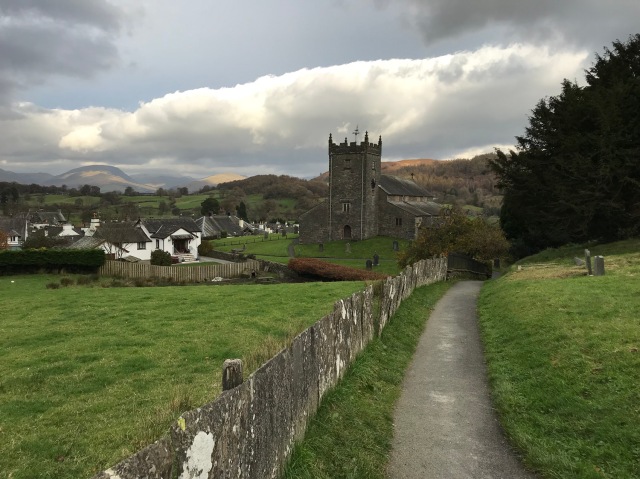 Please note flag fencing to the left. Thank you.

Brooding landscape or what?! Clouds rolling in over hills, covering sun, shielding the land with its grey-green hues. That’s more like it.

But what a sturdy little church and inside (don’t look too long and hard at the pointing outside is all I will say) a box of wonders. 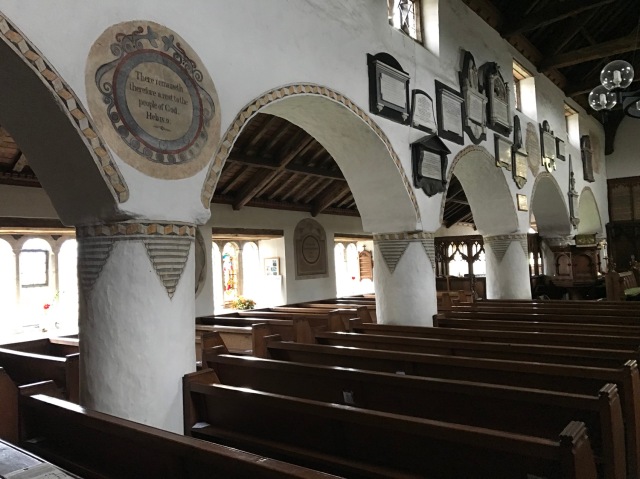 Trompe l’oeil piers and arches painted in 1680 to give a zig-zag and corbel effect. Also you can just glimpse the painted ‘Sentance of scripture’ . 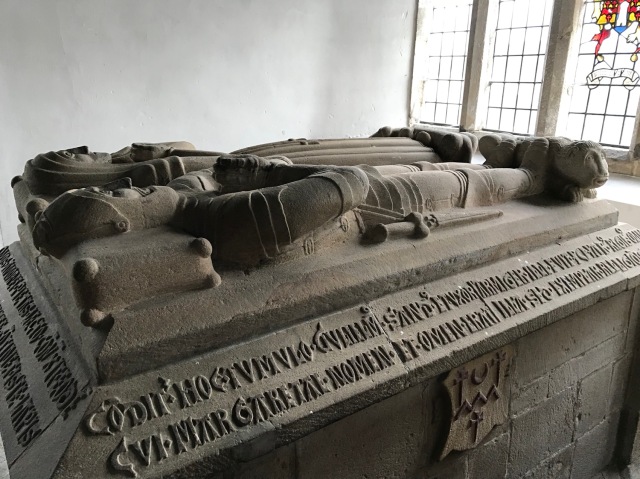 The tomb of Archbishop Sandys parents (c1578) on which the learned Pevsner (he of architecture guidebook fame) comments that we should notice the remnants of colour on the face of the ‘comical lion’. Bloomin’ cheek, nothing wrong with a bit of lippy! 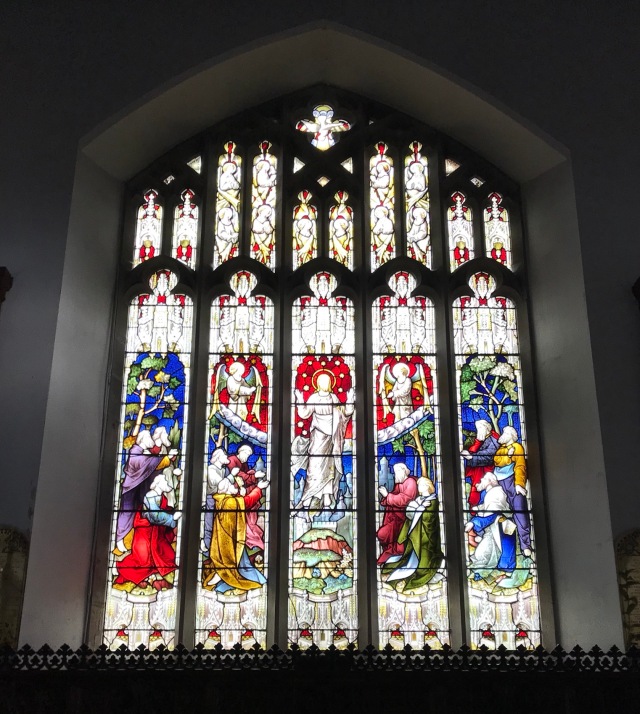 The Hardman window. And of course an array of 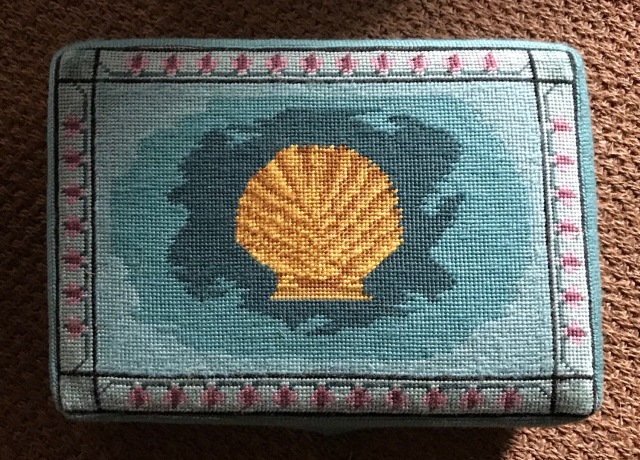 Hand-crafted kneelers. Sadly I managed to delete the picture of the fabulous communion rail kneeler in St James’ chapel which was adorned with Viking symbols as a reminder that Hawkshead (Haukr saetr – Haukr’s summer pasture) had Norse origins. Worse still I hadn’t noticed that many of the kneeler designs are of walking gear such as rucksacks, boots and water bottles…. I am sorry readers I have failed you. Perhaps I can redeem myself with this last little gem from St Michael’s. 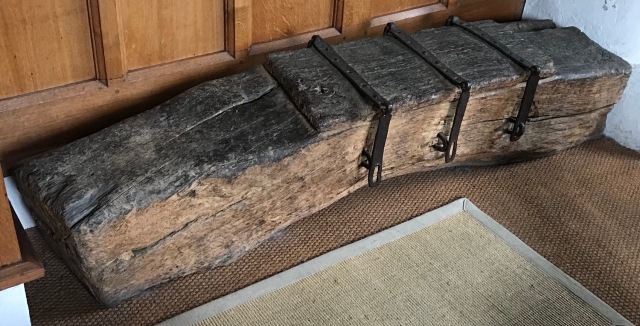 This chest was made in 1603 from a solid beam to house the parish records although it measures almost 6 feet in length the depository inside is only 3 feet which makes the chest extremely heavy to lift and remove…in case you had any plans ….

Busy old Archbishop Edwin Sandys – once prisoner in the Tower under Queen Mary, then escaped Protestant reformer in Antwerp where he watched his wife and infant son die of plague but finally made Archbishop of York by Queen Elizabeth I – in 1585 also founded Hawkshead Grammar School (now a museum). A bonny little school with a bonny little doorway. 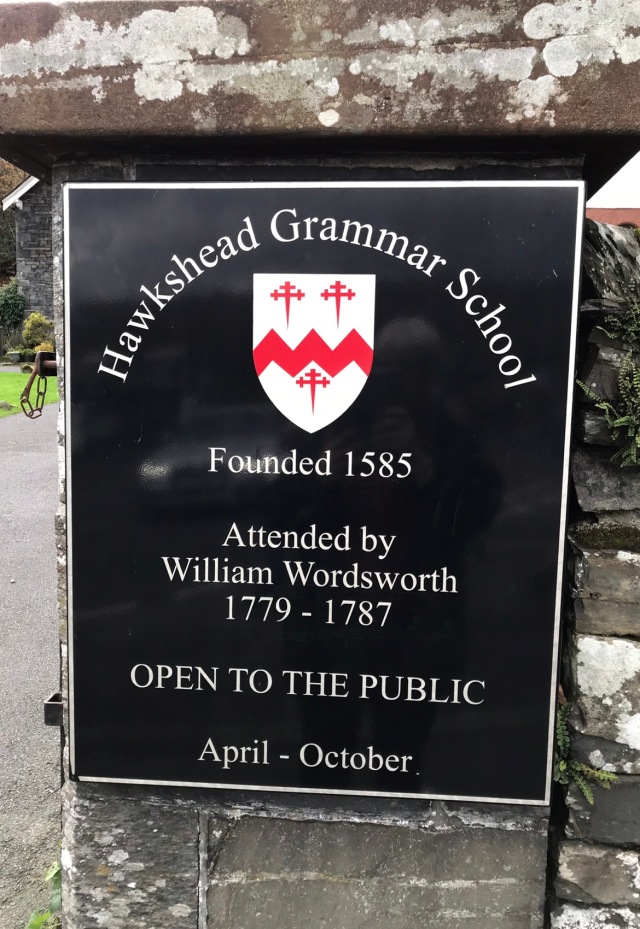 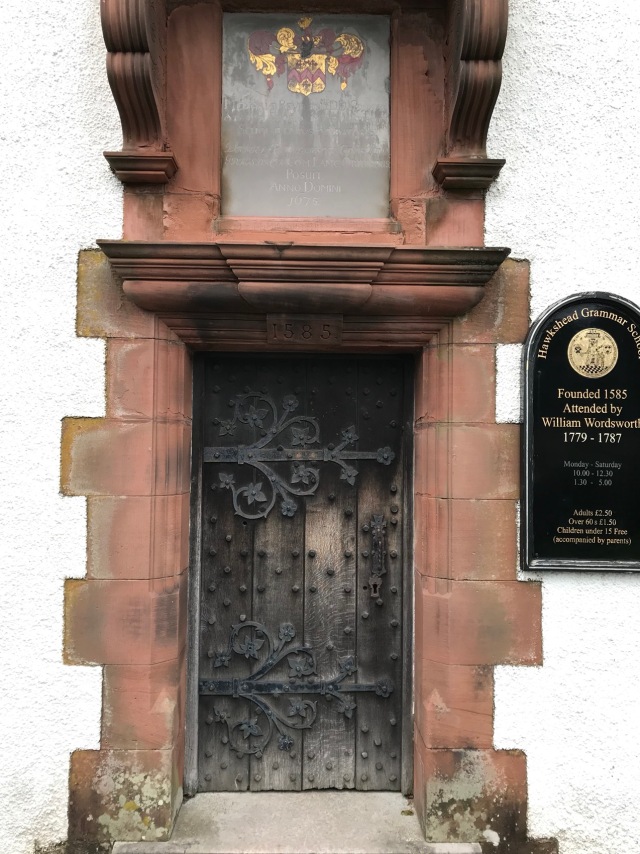 What a lovely note on which to finish our walk. Boots suitably muddied and me vindicated in the cost of their purchase (still makes me break out in a cold sweat) we returned to Kendal happy with a day spent in the fresh air, learning more than we ever knew about our amazing county.

Thank you J for your research and forethought in making this a brilliant walk. I raise a cup of Earl Grey to there being many more.