Funny little week this one with a veritable variety of small delights. The weather and remnants of the ever-lasting flu bug has limited my walking recently. With yet another forecast of f-f-f-f-reeezing high winds accompanied by a deluge (think BBC Weather marks it with charming two raindrops under a too fluffy cloud, its a deluge to me) the intrepid three J, JF and me decided that perhaps meeting for a cuppa would be enough for this week’s walk day. But we are not intrepid for nothing and decided on a short walk before the luxury of a warm coffee shop.

When I say short I mean short. Today’s walk was along one side of Kendal’s main shopping street Stricklandgate. For a Kendal walk we of course turned to Mr Nicholls and in this instance his Exploration No.1 Around Stricklandgate. To reduce the need to refer to Arthur Nicholls’ book in the everlasting downpour I made a quick (ie not very good) sketch of our half-a-street walk with all the highlights jotted down which I could preserve in a waterproof ‘envelope’. 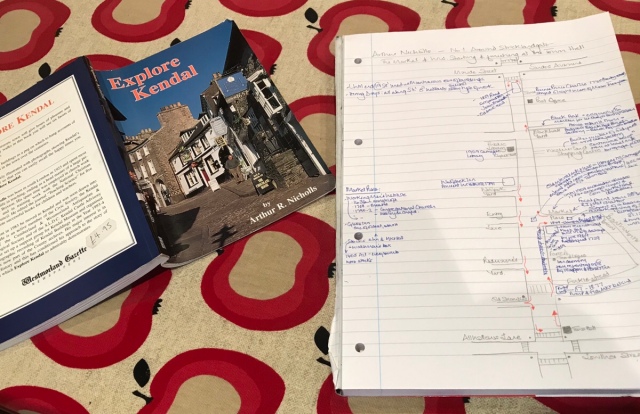 For such a diminutive amble Stricklandgate (one half) packs a historical punch. Kendal Town Hall is presently being restored after the damage wrought by Storm Desmond (2016) so a little interior shot is all I have to give to an idea of its grandeur. 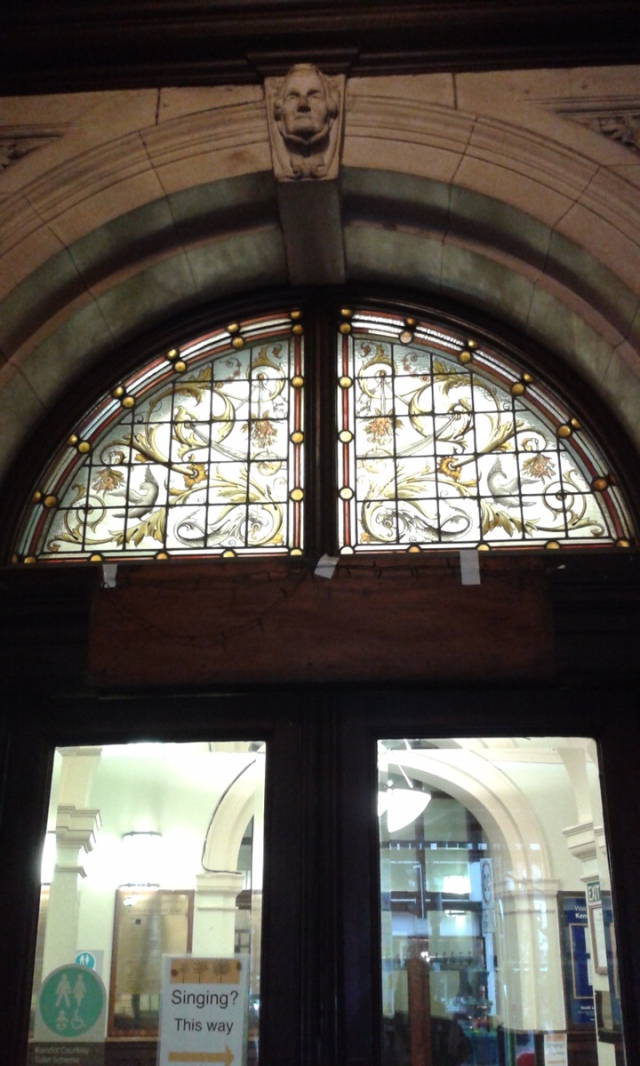 Passing up the opportunity to burst Maria-like into song we girded ourselves for a walk on the wild side of Cumbrian weather (I begin to wonder if there is any other type!).

We quickly trotted to the top of Finkle Street. 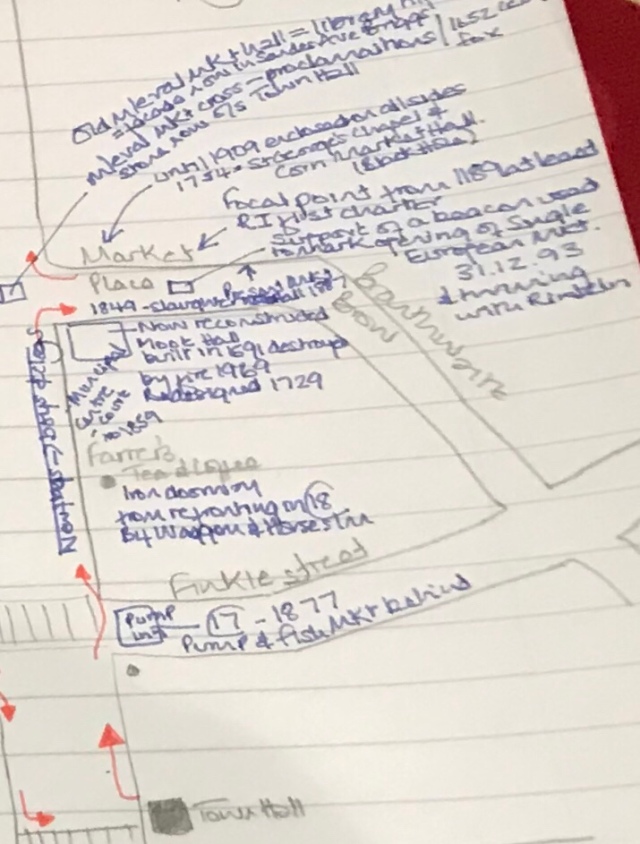 There has been much conjecture about the name Finkle. I like the old Kendalian story that it is from the Norse word meaning elbow as it does have a dog-leg as you walk downbank. My extensive research (I Googled it) is not entirely supportive of this theory and whatever you do don’t look up the definition of ‘finkle’ in the urban dictionary …. you have been warned.

Moving on. What has always intrigued me is the fact that Stricklandgate was lined with buildings on both sides (remember we are only looking at one half…) and the Pump Inn which lay across the top of Finkle Street fascinated me. I was imagining something grand like the Pump Rooms in Bath but the reality appears to have been a far cry from this. The fact that a fish market ran down Finkle Street behind it should have given me a clue. We are lucky that there are archive photographs of the Pump Inn. Here is my representation of one of them. I am afraid as it was all grey even my grey-heavy palette gave up. 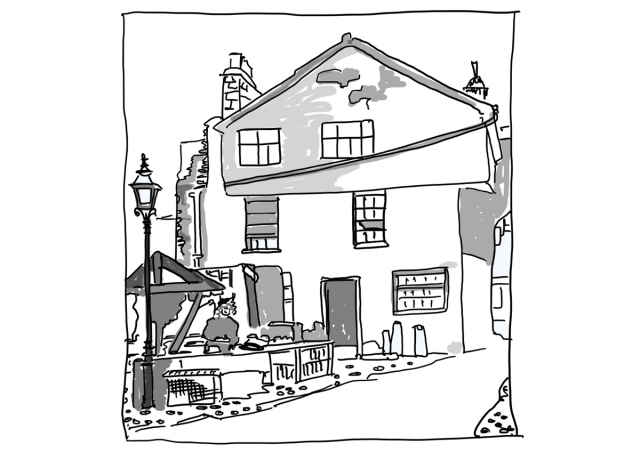 Tootling on we wistfully wandered on past Farrers Tea and Coffee. Ahhhh the smell of freshly roasted coffee that comes from this old coffee house is amazing. If you are up this way it is a must to visit Farrers with its wobbly timber floors and stairways. The coffee and tea are tasty as are all the home baked treats. You can also pick up Farrers’ goodies to take home. The building is fronted by the iron doorway which was put in when the building was refronted in the 18th century. Prior to this Farrers was a hostelry called the Waggon and Horses Inn.

Farrers had whetted our appetites but we carried on paying our respects to Kendal’s historic past: the buildings that survive – like the Working Men’s Institute and Globe Inn – and those long gone – like the Corn Market Hall with its grim prison named the Black Hole underneath. Further down the road (but not much further) we gave a nod to the old yards and burgage plots that now lie long forgotten under the modern Westmorland Shopping Centre which at least has hung on to our old County name.

Almost at our destination we skirted Blackhall Yard which originally housed a 16th century mansion for the first mayor of Kendal Henry Wilson and later became Hodgson’s Black Hall Brush Factory. There is a replica of the hog with bristles sign still hanging near the yard but one of the original wooden hogs can be seen at the Museum of Lakeland Life at Abbot Hall.

Finally Charlies and that long (er-hum) awaited cuppa but before we could enjoy the delights of an Earl Grey tea or three there was one last historic footnote. Charlies cafe is sited in the old house that Bonnie Prince Charlie is reputed to have stayed in on his retreat from Derby in 1745 and is where he was cared for by the Misses Thompson (make of that what you will). Ironically the house is said to have provided the same bed to the Bonnie Prince’s pursuer the Duke of Cumberland the very next night. Hope they changed the sheets … were there sheets…?

Amazing what a short walk can reveal. The same is true for a flying visit.

Yesterday I was in Carlisle to meet up with friends at Tullie House museum. I love this museum and the fact that I picked up a season ticket for £6.50 on my last trip has helped me appreciate it even more. 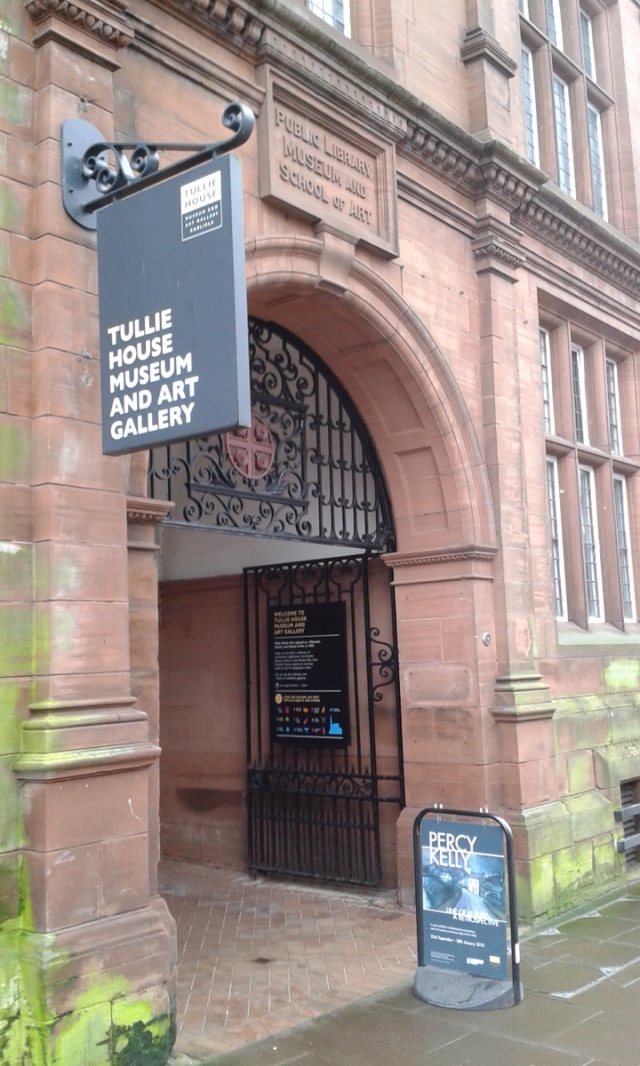 Having had a super catch up and lunch in the museum cafe I enjoyed an hour looking at the Percy Kelly retrospective. The work of this amazing artist is right up my street. Driven to draw everyday he generally had a linear and angular style with all those clean lined edges I find so satisfying. In addition to the drawings, paintings and prints I discovered textile prints and multi-media examples of his work. All wonderful but for me the most beautiful exhibits are his letters. He was an inveterate letter writer writing in a clear copperplate hand around the drawings he incorporated into his correspondence. His letters are erudite and incredibly illustrated how fortunate were his friends to receive them. No wonder so many survive they must have been treasured. If you have a chance to see this exhibition (which I hear is now staying in Tullie House until mid-February) I would thoroughly recommend going.

Understandably no photos were allowed of the Percy Kelly exhibition however elsewhere in Tullie House you are generally allowed to take snaps and I grabbed one of Tullie House’s latest acquisition, Driggsby. 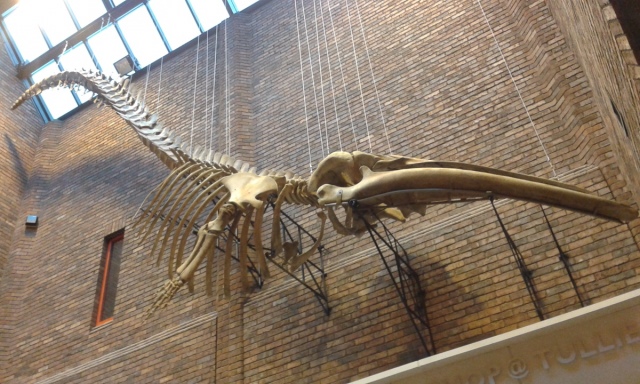 Sadly Driggsby a rare Fin Whale was found in 2014 by a dog walker at Drigg in West Cumbria. The young whale had already perished but has been kept in the county to illustrate the wonderful sea life we have around our shores and to act as a reminder to care for the environment that sustains these amazing creatures.

Lest I leave you on a sad note here is something that made me smile. Having completed our walk down Stricklandgate J, JF and myself trotted into Kendal Library and popped our heads into the colourful children’s library where we were bowled over by our talented friend AW’s fabulous display.

Hope her hard work leaves you smiling too.