Those of you that know me will acknowledge I am not a sun seeker. But when very good friends move to a home where the sun not only shines but also gives warmth – Cumbrians know all too well that the two do not always go hand in glove – what is a woman to do but board an airplane (first time in 17 years!) and fly out to sunnier climes?

Thanks to AJ and KJ I have spent a fantastic long weekend along with buddy J catching up with these lovely people and visiting their new home on Lanzarote. In case you don’t know Lanzarote is the most easterly of the Canary Islands. It lies in the Atlantic Ocean just off the coast of Africa. In fact although Lanzarote is a Spanish island it is only 78 miles off the coast of Africa and 621 miles from the Iberian Peninsula. Enough of the factoids. Here was the view from my bedroom window: 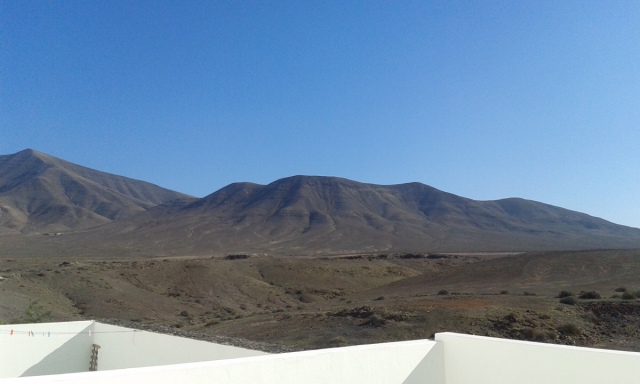 This just gives a hint of the amazing landscape of this island born of oceanic explosions and volcanic activity. The greatest recorded eruptions occurred between 1730 and 1736 in what is now Timanfaya National Park. It is the strangest topography I have ever seen. Not what you could call pretty but breath-taking nevertheless.

Traveling with our friends we gained a superb overview of the island: the wilderness of the National Park; the peculiar vineyards where vines (at this time of year looking rather dead to be frank) sit in dips made in the black piroclasts (picon) with horseshoe volcanic rock walls protecting them from the winds; the pretty towns and villages where buildings are all two stories or less and painted white; and the stunning beaches.

Our first port of call was the small pretty town of Haria where an artisan and craft market was bustling with local makers and shoppers.

The weather was perfect. The sun shone warmly but not stiflingly. Lanzarote is called the “Island of Eternal Spring” for good reason, temperatures do not fluctuate wildly and usually settle somewhere in the 20 degrees centigrade. Gorgeous.

We did not see much wildlife – we were excited to spot a small gecko like lizard – but the gardens are a picturesque mix of palms and succulents.

Leaving Haria we set off to Castillo De Santa Barbara which sits high on Mount Guanapay overlooking the old Lanzarote capital of Teguise.

The castle is now a museum of piracy not surprisingly as it was built in the 16th century to protect the Lanzarotenos from pirates like Sir Francis Drake! The castle affords an amazing panoramic view allowing you to observe two of the island’s coastlines.

In the top picture you can see our next destination, our lunch stop, Teguise. 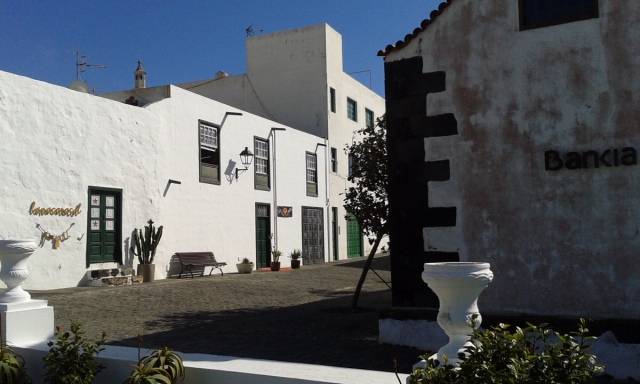 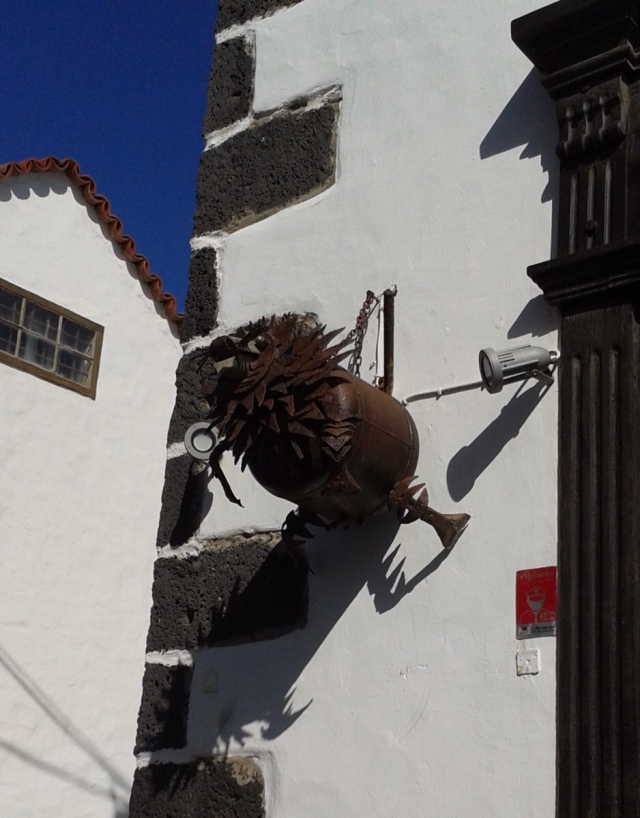 Teguise was once Lanzarote’s capital and it is a beautiful place to meander. The whitewashed houses like most on the island integrate with the landscape and are adapted to Lanzarote’s geology and weather. I love them. Occasionally there are buildings which standout from this general principal. One such is the Church of Our Lady of Guadalupe.

Once a very simple building with no windows and only stone seats set in the walls Our Lady of Guadalupe has seen its fair share of Teguise’s history of looting, violence and arson since it was built around 500 years ago. As a result the church has undergone several renovations and expansions. It is now Lanzarote’s principal church. Situated beside one of Lanzarote’s convivial town squares – they just cry out for a sit down and a catch up – the church fits comfortably within the architecture of Teguise.

What an amazing day we were having and it got even better as we set off after a delicious lunch – mine an aubergine bake and sweet potato fries….drooling a wee bit now – for the west coast and the stunning beach at Famara lying under the dramatic Massif of Famara.

The waves formed rollers which crashed the shore as we stood and watched. The whole effect was quite mind blowing for someone used to the mud of Morecambe Bay. If you are wondering why the sand is not black I am led to believe that this sand has actually been blown to Lanzarote from the Sahara. As you can imagine showing a Brit all this sea and sand can only result in one thing…paddling! AJ thank you for joining me in the whooping and hollering as the freezing Atlantic cooled our hot tootsies.

More shocking behaviour was to follow for the next day I donned …. flip flops! I don’t think I have owned a pair since I was a child and it was liberating, even if my feet didn’t know what had hit them. Sunday was a gentle pootle-ing sort of a day with an exploration of Playa Blanca AJ and KJ’s home town.

I can see why they have settled here. In addition to the glorious weather (have I mentioned it was sunny?…) there are archaeological/antiquarian sites (just made for me); wonderful walks; beaches; courtyards and cool (in all senses of the word) places to eat. Let’s start with a bit of history. If you are groaning don’t worry it will be over soon, humour me. It’s those pesky pirates again. 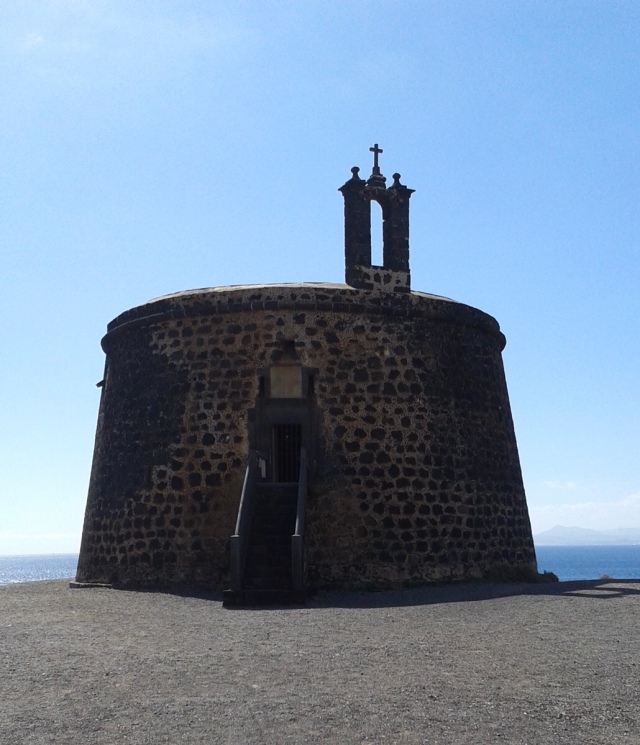 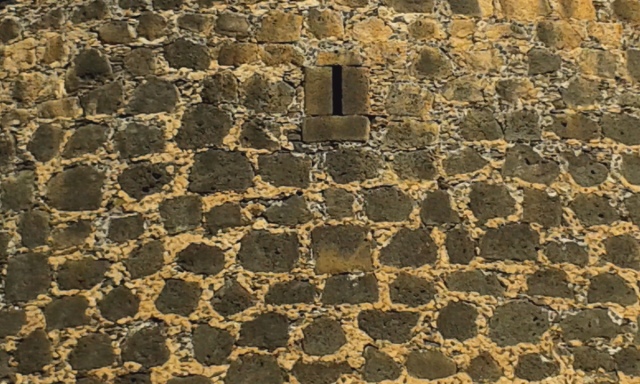 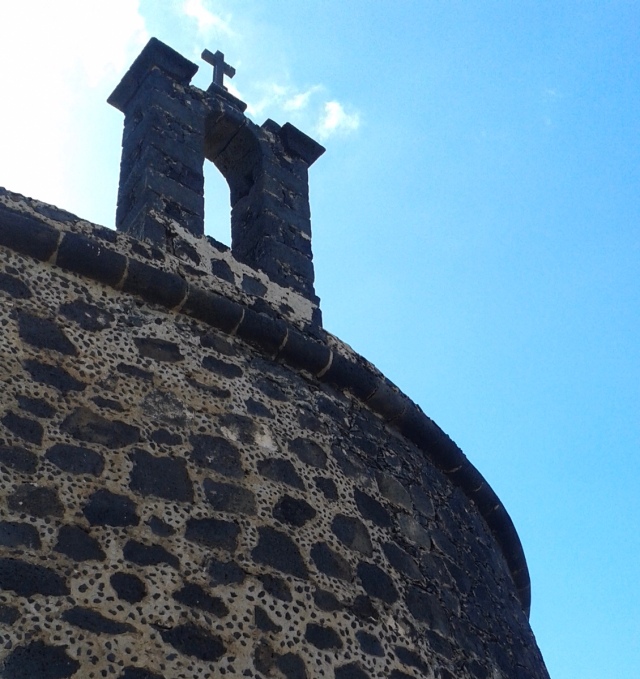 This magnificent structure is El Castillo O Torre Del Aguila otherwise known as Las Colorado’s Castle. Like the Castle of Santa Barbara it was built (this time in the mid 1700s) to warn of pirate attacks. Originally it was surrounded by a dry moat and stands near to a small promontory which can now be accessed from a promenade walk.

Minutes away we were walking among small courtyards, 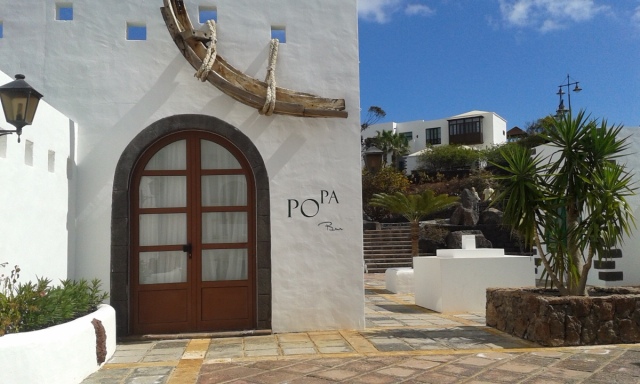 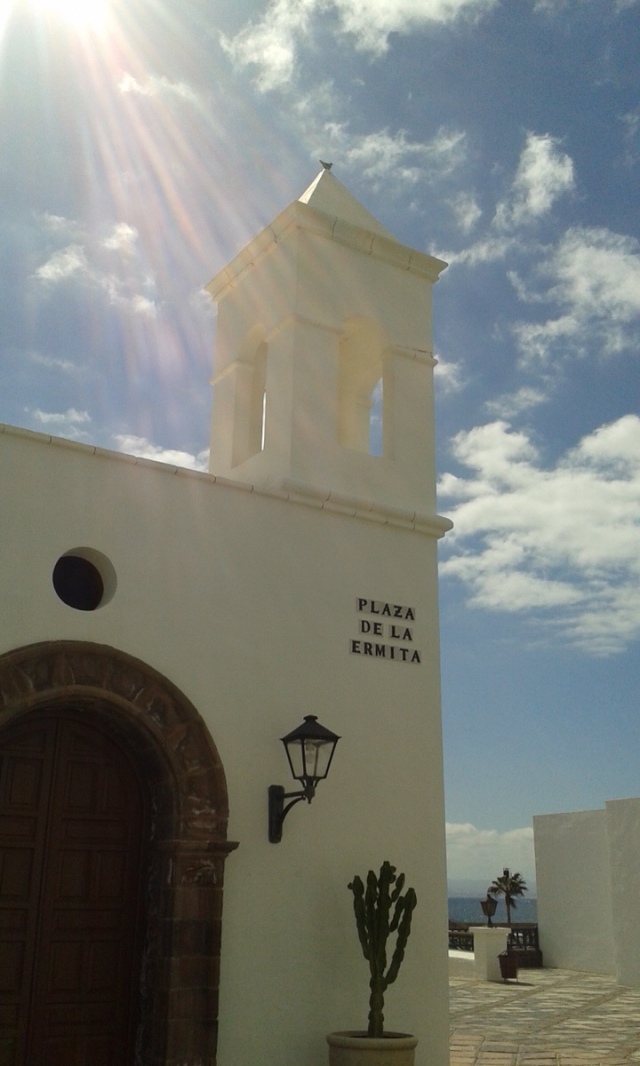 Before enjoying a drink overlooking the marina.

Too soon it was time to go. While Lanzarote (and its weather!) is gorgeous and hard to leave hardest of all was saying goodbye to AJ and KJ. But – despite the shriek-fest paddling – these wonderful peeps have invited us to come back. So not so much a good-bye more an au revoir.

Thank you AJ and KJ for showing us such kindness and sharing your superb new island home.

2 comments on “Sunning myself”