Today I share with you a guilty secret. Brace yourselves for some hideousness.

In the room I like to call my study (well I do read in there) is this …. 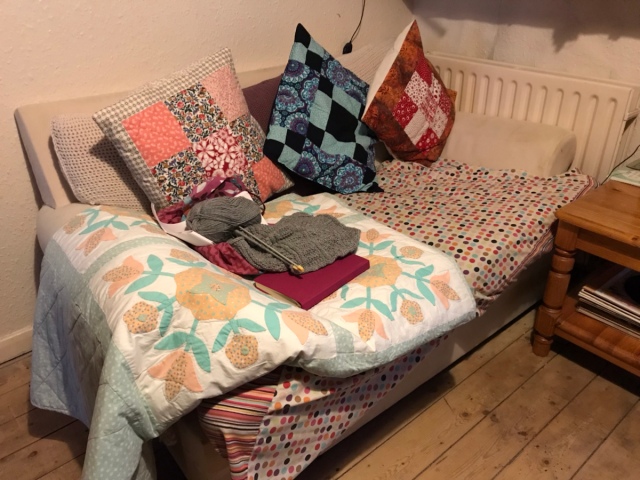 Ermm disintegrating heap of an old sofa. But wait you have not seen the full horror. Close your eyes if you are of a nervous disposition and cue music from ‘Psycho’:

Before you disown me for the lush that I obviously am let me explain. First the sob story: this was my mother’s sofa (aaaaaahhh) however she died almost 20 years ago … and she gave it to me before she died (tut, tut). Next the pragmatics: the sofa was until ‘fairly’ recently covered and the covers had (after a fashion) withstood the rigours of children and two elderly spaniels. But enough was enough and in a moment of madness/cleanliness I donned a nuclear fallout suit and whipped the covers off and disposed of them. Don’t worry you are safe.

I couldn’t however get rid of the sofa: it has sentimental value, a good solid frame and it provides a cosy nook to curl up with a yarn-y project or a good book. So recently – ok, several years ago – I decided I would re-cover it. In my head this was a perfectly formed LITTLE endeavour. The project even had a boost when super friend JG donated me some old curtains.

Plenty to cover a small settee. Surely an easy weekend make would follow in which I could sing the praises of re-cycling and making do and mending. Yet even in my pea brain something told me that this was going to be trickier than my original vision of up-cycled loveliness allowed. I stalled.

But now only three years later – I am not the Procrastination Queen for nothing – I have started creating loose covers for Omi’s sofa and here I am describing the makeover, part one of it anyhoo (let’s not go wild!). As with all good 21st century projects I started by trawling the internet. Now I don’t want to say that other’s have had it easier but every similar sofa recovering I watched seemed either to involve box type cushions and/or staple guns.

Omi’s Sofa has ‘nobbly’ shaped seat cushions and recessed arms meaning more shaping would be involved. I also did not want to staple the covering to the sofa. I want to be able to remove it for washing. I have a granddaughter! and she is second only to me as a ‘dropper’. Finally I have ‘previous’ for being lethal with a staple gun…don’t worry that child’s limp is barely noticeable now….

Suffice to say Jolly Janome and I were going to work this together with a little bit of tacking and hand sewing thrown in for good measure. I even moved my scene of operations downstairs. Ironing board too.

My first objective was to cover the seat cushions. Not being one for maths I worked by covering the foam with the fabric inside out and cutting and tacking then sewing around the ‘L’ shaped corners.

I am still using the original seat cushions and wanted to keep the covers loose enough to remove easily when, at some point in the next century, I get new foam. For this reason I put vents into the side seams.

This called for some tricky pinning and tacking but I am pleased that the vents afford easier removal.

The almost finished cushions are a wee bit lumpy bumpy thanks to the old foam but I am happy that they turned out a matched pair and I hope you agree that already Omi’s old sofa is vastly improved.

For now (another three years?) I have thrown the remaining curtaining over the settee and as I had already crochet covered the back cushions by adding a row of patchwork cushions (thank you KS for the beautiful blue one) the sofa has a new lease of life.

But I must dash. I have a cosy nook to sit in and that Ann Cleeves thriller will not read itself.

PS the rug was knitted with jumbo needles using selvedge yarn. In case you wondered. Mx