Two posts today. In my last I shared with you a walling walk around Coniston. In this walk we are closer to home.

For this perambulation there is no getting there as we are already here. J and I started our ‘tour’ by meeting outside Kendal Parish Church (more about this gem later) ready for Mr Nicholls’ ‘Exploration No. 3 Kirkland The Original Kendal’. Within minutes we were lost! Hilarious as I was born here and have lived in Kendal for almost the last 30 years… this is what happens when you take a walk on the wild side and discover a Kendalian ginnel you have ignored before.

This particular ginnel being Kirkbarrow Lane:

Known also as T’Crack (stop with the ribald humour) Kirkbarrow Lane is a walk into the past. It once provided an ancient pathway between Kendal’s first church at the Holy Well and the ‘new’ church of 1210 by the river (definitely more of that later). As you can see it is atmospheric:

Sadly, as we found along much of this walk, the olde Kendal buildings and monuments are often no longer there. Hence we got a bit muddled and roamed off piste. The detour was worth it however as we visited the Anchorite Well which according to local tales was home in time of yore to a hermit (anchorite) who as the story goes had returned from the Crusades still haunted by murdering his brother and sweetheart (deserves at least to feel haunted I’d say) and sought to salve his conscience and earn heavenly forgiveness by living the life of an anchorite. How true this is I am unsure although I am pretty certain a hermit did live here (apparently it was all the rage in the early Middle Ages). The civic society sign gives a more detailed history:

But I don’t think I would risk drinking the water …. 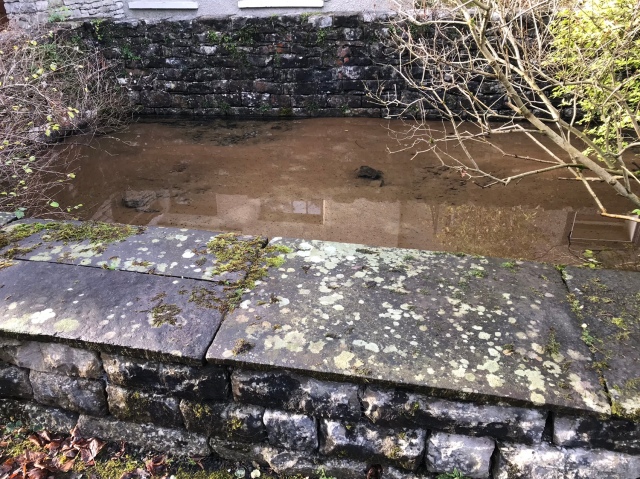 This is also the aforementioned Holy Well and probably the site of a wooden Saxon church. Now a housing estate the area connects to its past through the road names.

After a fair amount of zig-zagging across Kirkland (my favourite part of Kendal as it oozes character) we landed back at Kendal Parish Church a place of worship for the last 800 or so years.

The nave dates from 1201 but the church may hold some remnants from its older sister church at Holy Well. The Parr Chapel – yes that Parr family … think last and surviving wife of Henry VIII, this chapel dating from the 15th century was built (commissioned I’d say) by the Parr family – houses a fragment of a 9th century (800s) Anglian Cross possibly from Holy Well. Sorry for one of the longest sentences in the known world!

The church grew to be one of the widest in the country apparently only 7 feet less than York Minster. Go Kendal builders! Glad to say it offers some more recent gems, including an altar frontal in the Saint Thomas-A-Becket Chapel by the late Susan Foster a well known Kendal weaver:

Now faded it is good to see the design echoed amongst the fabulous kneelers:

There were sooooo many wonderful kneelers that I couldn’t record them all. Worth a visit just to see the whole merry collection if you live hereabouts or are visiting.

Of course a building of this age holds many secrets and stories. We looked out for the helmet and sword which could have belonged to Sir Roger Bellingham but more excitingly may have been the property of ‘Robin the Devil’ known as Sir Robert Philipson by his friends (if he had any) who was said to have ridden into the church in pursuit of his enemy Colonel Briggs and lost his helmet on the way out.

All this commotion apparently occurred around the late 15th early 16th century.

Kendal Parish Church has seen it’s fair share of life’s ups and downs: raids by the Scots, the dissolution of the monasteries, the reformation, Jacobite rebellions and naughty window-breaking grammar school boys to name but a few. It is hard to believe that there is an unbroken succession of ministers from 1190 to the present but here is the plaque to prove it:

In a world seething with change it is an amazing testament to the continuity of one small community. After all that history my butties were burning a hole in my sandwich box. Egg and salad cream again if you wanted to know.

Time, as we chomped, for a bit of celebrity ‘spotting’. Renowned people that are rumoured to have visited Kirkland are King Arthur (may be taking this one with several pinches of salt), Bonnie Prince Charlie (very likely) and Dickens who reputedly saw the communal bakehouse that once existed close to Nether Bridge and made reference to it in “A Christmas Carol”.

And while we are on with the famous of Kirkland we should also mention portrait painter George Romney (1734 – 1802) who lived for some time and died in a house (handily named Romney House) on the edge of Kirkland. The house is still there. Recently I visited Abbot Hall Art Gallery where a number of Romney’s paintings are permanently exhibited. Luckily I went with someone who knows much more about art history than I do. Thank you MB, I came away with a much greater appreciation of Romney than I had previously felt.

Kendal still has so much to reveal that it will no doubt appear in future posts.

But for now … until next we meet,