On the face of it Leipzig is one more big city with lots of shops but there is much more to it. Take last night for instance. I went out to find the nearest veggie cafe and walked straight into a demonstration. I hasten to add it was VERY PEACEFUL I mean one of the placards even said ‘I am just here to say Hello’. Nonetheless it reminded me that Leipzig has a strong history of challenging wrongs and played a significant role in the fall of Communism in Eastern Europe.

I was curious about this demo and discovered it formed part of the history of the Monday Demonstrations. The initial demonstrations began in Autumn 1989 in Leipzig after the weekly prayer for peace in St. Nicholas Church and demanded the right to travel and to elect a democratic government. Yesterday’s demo was to mark the anniversary of the most famous Monday Demonstration held on 9 October 1989 when the protesters swelled in numbers to more than 70,000 all united in peaceful opposition to the regime.

I am glad a little piece of serendipity let me see this peaceful gathering and remember that “Wir Sind das Volk!’ (We are the people) who together can accomplish amazing things. To see where all this started I went today to see St Nicholas Church.

To understand how brave this movement was I also went to visit the Stasi Museum (Museum in der Runden Ecke), 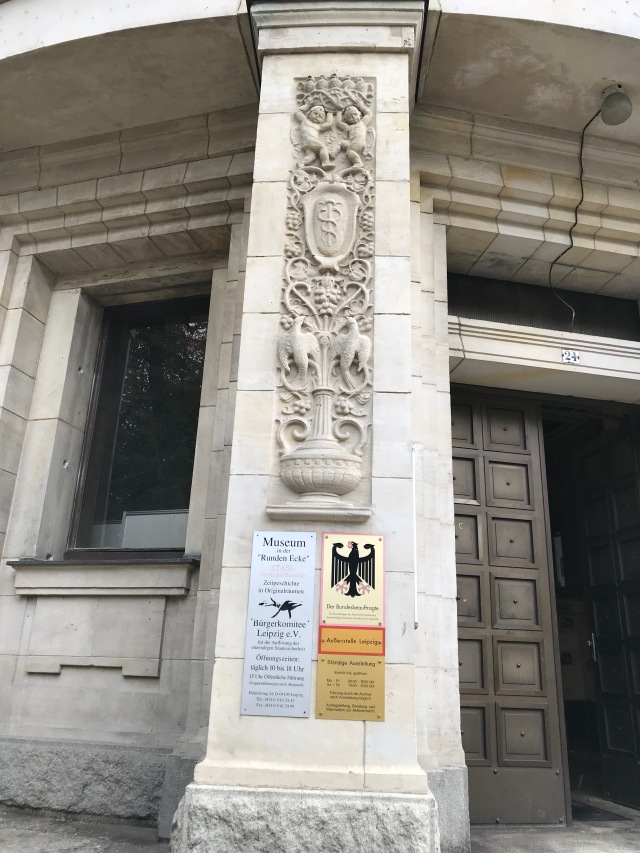 Housed in the old Leipzig Stasi headquarters the museum is an uncomfortable and unsettling example of the few short steps it takes for a state to move from having a legitimate police force to having a Stasi. Not only was there the terrifying prospect of ‘vanishing’ but the Stasi also employed much more insidious psychological methods to destroy lives and careers. Only now by accessing the records held by the secret police can people understand how their lives were undermined by subtle Stasi tactics. State bullying of people for the merest form of dissent was commonplace.

You were allowed to take photographs in the museum however (unusually) nobody was and it felt wrong to do so. I took this shot of the entrance lobby.

And stopped when I passed through the door that you could enter but not exit. Free entry to the museum was I suspect to ensure that no one profits from suffering.

I needed an antidote to the evil manipulation of people and sought solace in music at the Bach Museum.

Located in the house of the Bose family who were friends and neighbours of the Bachs this fresh and modern museum celebrates the 200 years that this musical powerhouse of a family (oh for those genes) dominated the German music scene.

Special to me – cos I seem to have developed a love for organ music – was this beautiful instrument:

And the journey it has been on.

Other highlights were the tubular bells 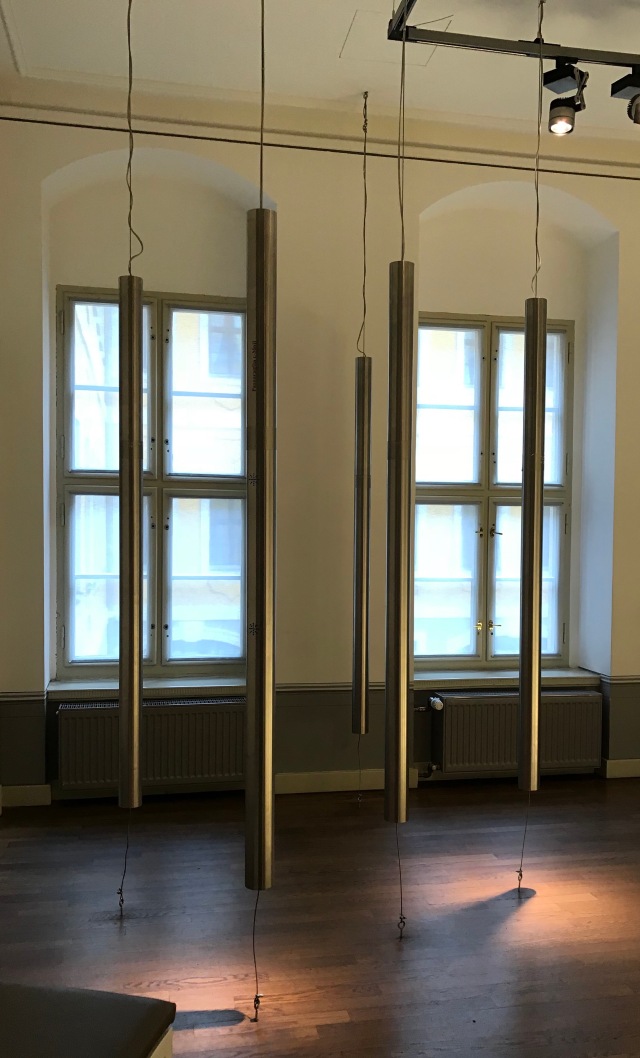 Gently swing them around and hey presto! You are playing Bach. Get me the musical genius.

Mustn’t forget Bach’s orchestra, the original artworks and manuscripts and OH YES all the opportunities listen to beautiful music composed by various members of the Bach dynasty…particularly Johann Sebastian. I could have sat there all day just to hear the music.

But my musical sojourn had not ended. I trotted across the road from the museum and to St Thomas’ Church famous for its choir and choir school.

I walked in and was taking this snap when ….

…. the organ started playing. WOW! It was mind-blowing it’s phenomality (don’t think that is even a word) no doubt augmented by the surprise. It was a lesson for a young organist (don’t play in Constantine’s Basilica, save yourself!) and wonderful to hear.

Now to matters domestic. Himself has made a nest in my crochet. 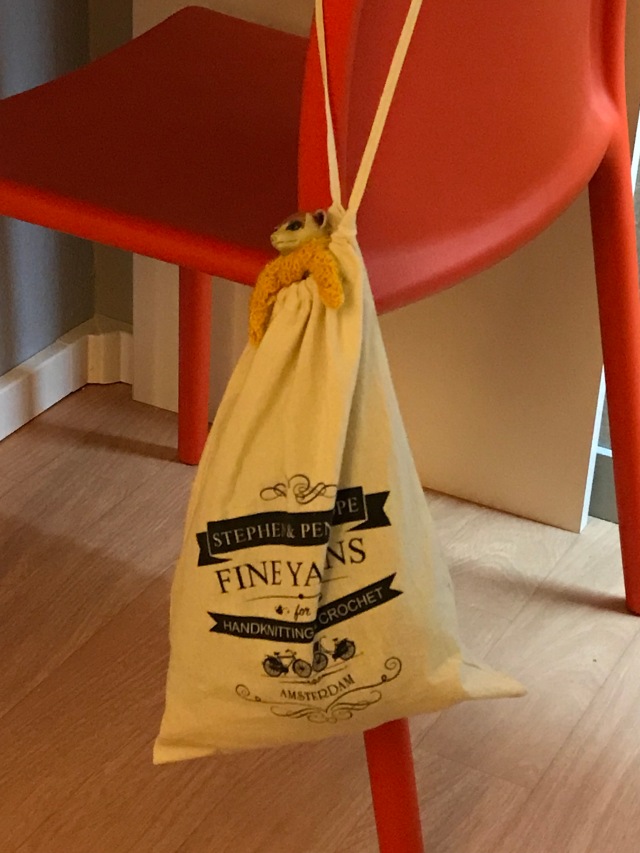 He believes I may have been defeated in my wool challenge. I confess it was looking bleak in Leipzig. No dedicated wool shop (well not in walking distance) where to turn…?

The local shopping centre! And this beauty had something for every crafter under the sun, including stones for those interested in rock carving. My bag is heavy enough I stuck to buying a ball of wool. 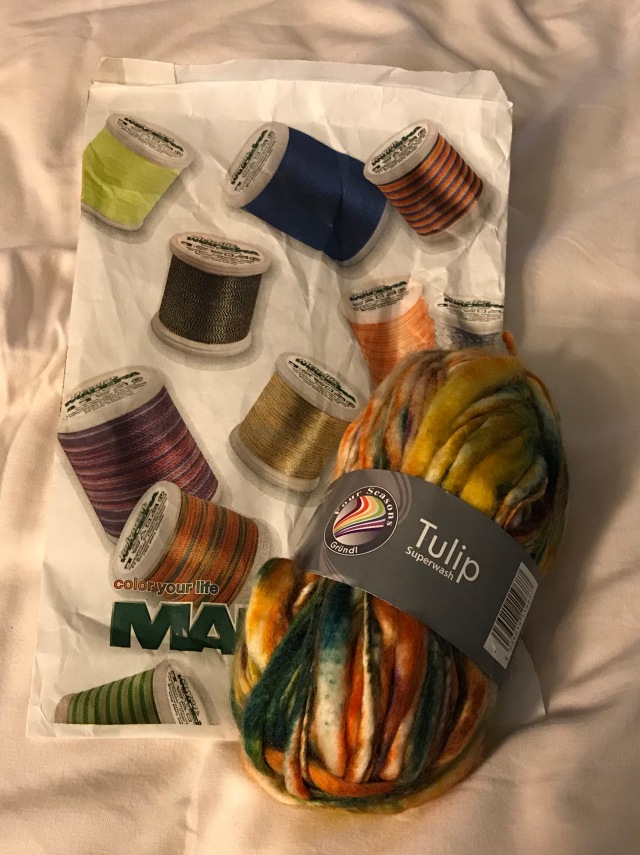 Coming in it’s own colourful bag welcome Leipzig mixed twist wool. Move over Mr T there’s a new wool on the block…I mean in the bag.

That was my flying visit to Leipzig. A city where old and ultra new come together:

So ultra modern is Leipzig that I still haven’t figured out how to switch on the loo light and as to the lift I spent about 20 minutes trying to get it to stop at my floor. Mind you I made a lot of friends as I travelled up and down.

Auf Wiedersehen Leipzig exciting city of contrasts and old ladies trapped in lifts. Tomorrow I am off to Berlin.