I am culturally replete. Wednesday 14 March 2018, what a day! Three exhibitions, a bookshop and a castle all in a whistle-stop visit to Carlisle. To save your eyes and my sanity I am splitting the exhibitions et al into two posts. Today I am concentrating on the Women of Cumbria exhibitions currently on view in our lovely Border city.

“Sit up straight you ‘orrible little blogster you…” oh dear better get typing.

Trusty companion J and I went first to Carlisle Castle to see the ‘Follow the Drum Women’s Stories from the Regiment’ at Cumbria’s Museum of Military Life. 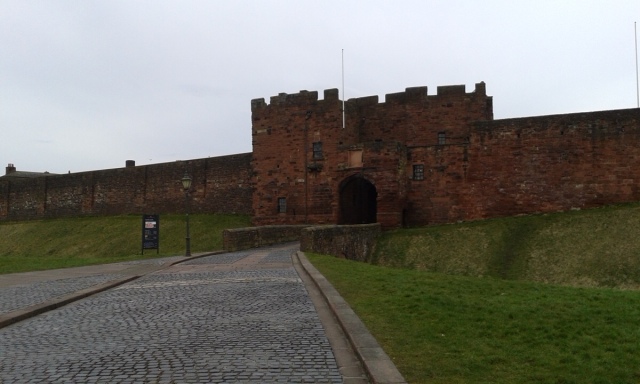 Carlisle Castle deserves a blog post all of its own but that will have to await a further visit – perhaps for the Poppies: Weeping Window display running from 25 May to 8 July 2018 – as I need to move on quick smart…yes sa-ah. Suffice to say the Castle has an incredible history which stretches from the 10th century to today. It has even been the headquarters of both a Scottish and an English King, although not at the same time! 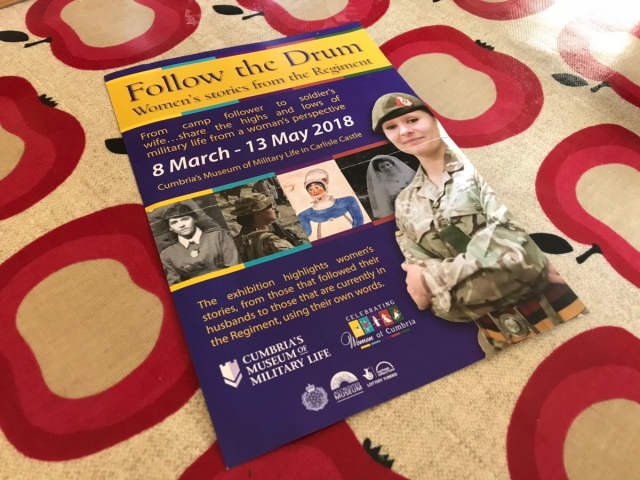 ‘Follow The Drum’ gave us a glimpse of life for the women who either followed their men to war or more latterly have joined the military themselves. The exhibition concentrates on the changing relationship between women and the army focussing on the period 1800 to the present.

Most amazing to me were the women of the early 19th century, those that followed their husbands to the Peninsula War (think Duke of Wellington, think Napoleon). While being regarded as camp followers or prostitutes these valiant women kept the men’s clothes clean, tended the injured and risked their own lives and health. Nonetheless they worried the army hierarchy who sought to regulate them by making their husbands responsible for their behaviour…. 21st century woman biting her tongue here.

The stories of women like Catherine Exley who followed her husband in the early 1800s to the Peninsula War are astounding. Having gained permission to join her husband Catherine was witness to the battles of Salamanca and Vittoria and in ever present danger. She notes in her memoirs that she tore the linen off her back in order to bind wounds and was used to fetch water to quench the thirst of the dying. Her story is both harrowing – she lost her son by following the regiment – and inspirational: it was the support of the other women and wives that kept her going. This mutual support is a theme that runs throughout the military women’s history. 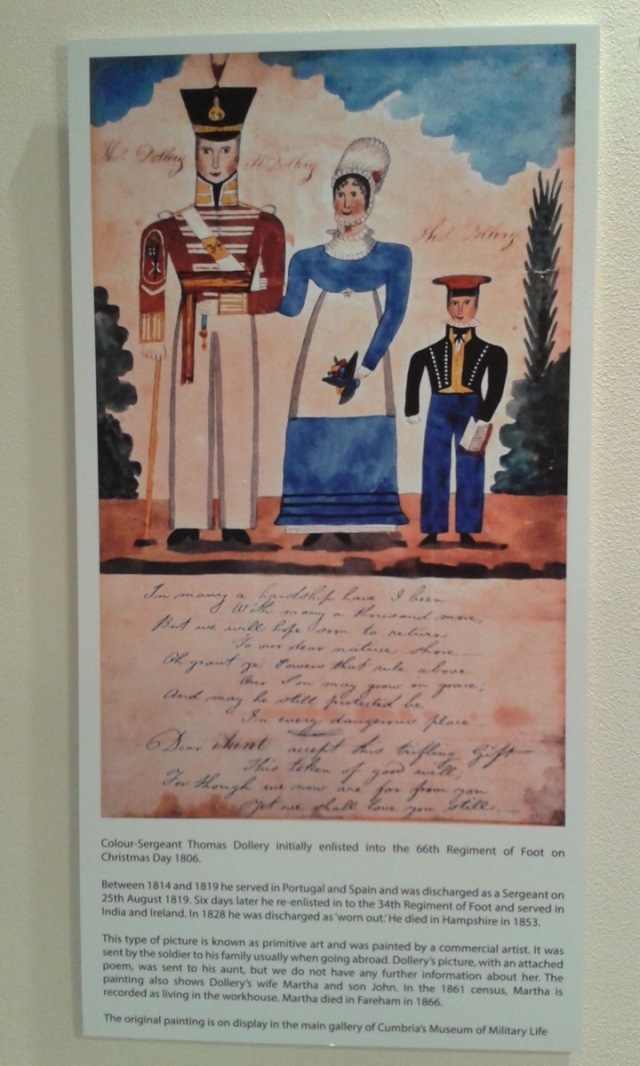 But I don’t think the reality of nineteenth century military life is truly reflected in the strangely charming pictures of these families. This sweet and colourful portrait of the Dollery family certainly belies the truth. Having outlived her husband poor Mrs Dollery was ‘rewarded’ by life and finally death in the workhouse.

But these women soldiered on. Later in the 1800s another stalwart was Mrs Skiddy – Biddy Skiddy to her friends. Biddy was remembered for washing the men’s clothes and supplying tea but she also carried her injured husband, complete with his rifle and kit, on her back for half a league (about a mile and a half) until she could lay him down in a bivouac. A tough cookie.

Thankfully the army came to realise that the military wives were assets, a steadying influence and good for the soldiers’ welfare. In fact for the Victorians the family image fostered by the military’s better treatment of the women improved the army’s poor reputation. Even so orders is orders and the Standing Orders of 1896 made it clear what the army expected of soldiers seeking to marry: 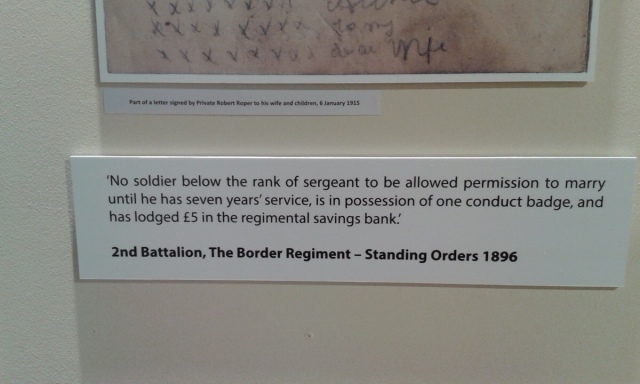 Despite the wars and dangers one thing survived, love. And this collection of cards sent by Private Wood to his wife and daughter during the First World War made my heart melt. 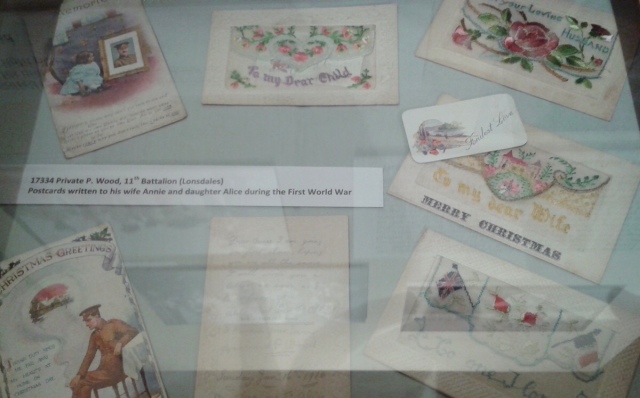 The final sections of the exhibition moved to the twentieth century and the active role of women in the military. With up to date accounts from serving female personnel like Private D J Ferguson. Her comments on military life brought an interesting insight into a woman’s perspective of life in the army today.

But before we knew it we were “Dis-missed” and off to our next Women of Cumbria port of call. Quick march!

Tullie House’s exhibition is a contrast to most of those we have seen so far. Instead of sighting the exhibition in one room (except for the Cracker Packers*) Tullie House has used the Women of Cumbria motif as an opportunity to highlight 10 objects around the museum and allow us to discover the stories of the women behind them. 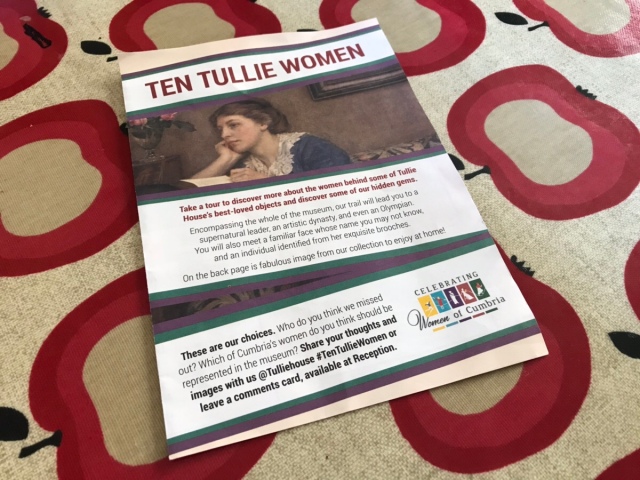 Honestly I went to corners of the museum I have NEVER visited before! What a brilliant idea. Carlisle has had such a varied history the artefacts cover women’s history from the Romans up to the twentieth century. Sadly incompetent photographer that I am I have failed to transfer several of the objects that we looked at …. I can only offer up a few highlights. Drawing a veil over the Roman era – I know whatever next?! – I move swiftly to the Vikings and the beautiful ornate brooches used to pin a Norse woman’s clothing, 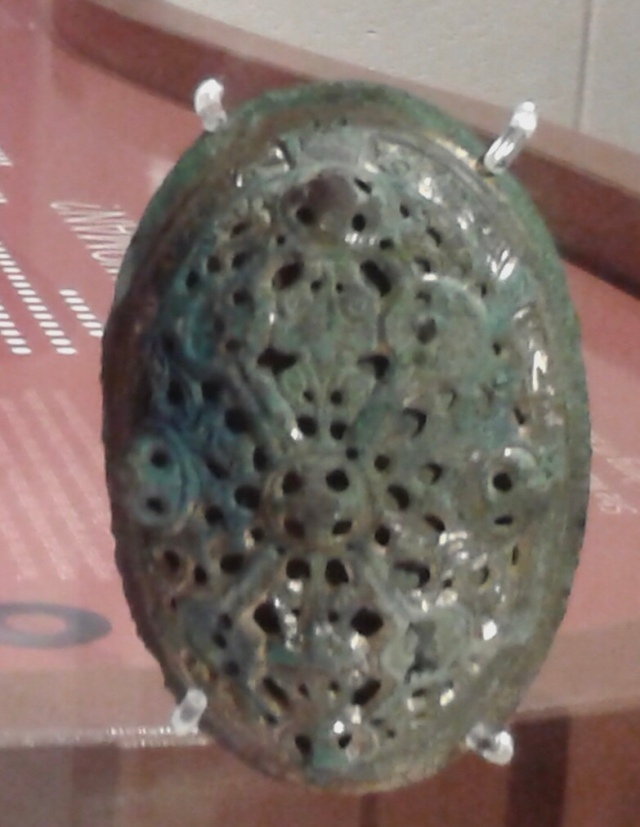 This grave good is one of a pair but I decided to edit its partner brooch as the photo was too wobbly. It reads ‘must try harder’ on my photography homework. I used to call these tortoise brooches but I notice that no such nomenclature was mentioned so I wonder if this is a new naming protocol (bit like the Brontosaurus vanishing in favour of the Brachiosaurus). These open work brooches are sizeable things not dissimilar in size to an adolescent … tortoise…. And while beautiful they are certainly strong enough to support clothing together with chains and jewellery strung between them. 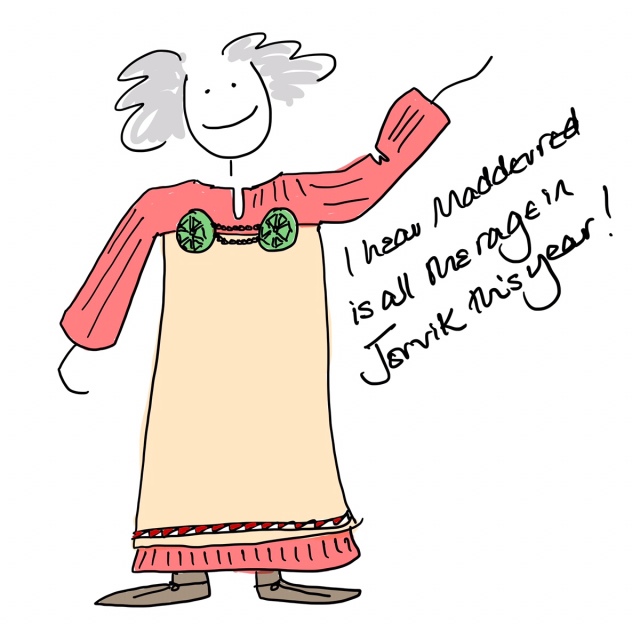 Moving swiftly on before I get over fanciful there were a couple of exhibits I think particularly worthy of attention. One seems humble enough. 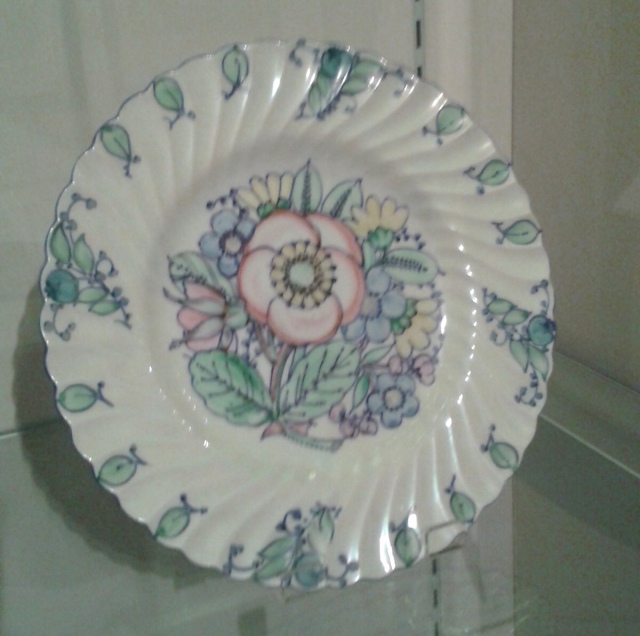 This dinner-sized porcelain plate painted with enamel is the work of Ann Macbeth. Ever heard of her? I certainly hadn’t yet not only was she (take a deep breath) a renowned embroiderer, artist and writer, member of the Glasgow Movement, associate of Charles Rennie Macintosh, lecturer at The Glasgow School of Art she was also an active suffragette imprisoned for her beliefs, a banner maker and also a proponent of women being able to earn their livelihood through craftwork. Born in Bolton she moved to Patterdale in the Lake District in 1920 and died in Cumbria in 1948. All round someone I would have loved to have met.

Finally – thanks for staying with me soooo long – another role I hadn’t considered much in relation to women (although my yarn stash should have taught me better) is that of collector. One of Tullie House’s most important artefacts was generously donated by talented musician and instrument collector Miss Sybil Mounsey-Heysham. Along with a number of wonderful antiquarian stringed instruments Miss Mounsey-Heysham gave the museum the Amati violin.

The father of violin-making Andrea Amati is thought to have made this violin around 1566. It forms part of the earliest (older than Stradivari by almost 100 years) and most famous set of stringed instruments. Amazing in itself but what I liked best was learning that Miss Mounsey-Heysham had probably played the instrument herself and that occasionally – for the good of it’s health – the Amati is still played. Like a teddy-bear that is hugged rather than kept pristine I can’t think of anything that would be more appropriate for this rare and beautiful instrument. Wherever they are in the universe I hope that Miss Mounsey-Heysham and Mr Amati enjoy the performance.